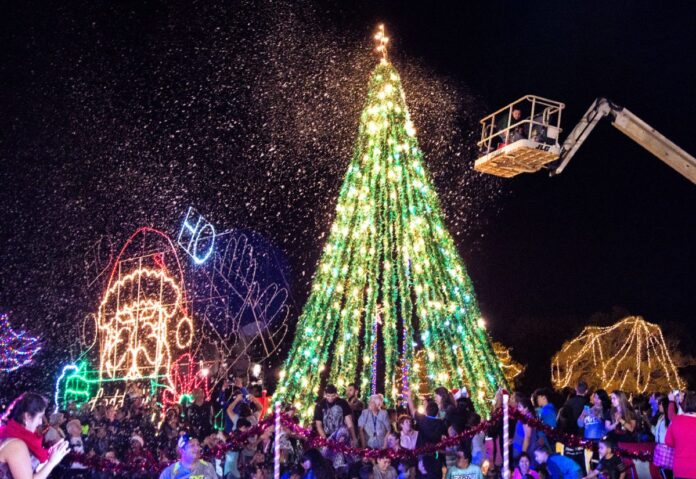 The night before, she joined a record crowd at the 31st Annual Lighting of the Arroyo.

“It gives me the Christmas spirit,” Rodriguez, who helps her father at his shop, said yesterday afternoon at McKelvey Park. “It’s pretty nice.”

The city’s biggest Christmas party drew as many as 4,000 residents Thursday night, according to Cassandra Cuellar, executive director of the Harlingen Convention & Visitors Bureau, which put on the show.

“The park was full from edge to edge,” she said. “Every vendor sold out of food. They’d never seen a crowd like that before there.”

The city will light up the display through the first week of January, Javier Mendez, the city’s parks director, said.

“It’s really a kickoff to the Christmas season,” Mendez said.

This year, eight main ornaments make up the city’s biggest Christmas display beaming with tens of thousands of lights along the city’s Hike and Bike trail.

“We lit up everything — the trees, the light poles, the pavilion,” Mendez said.

Mendez said the city added three ornaments with a total price tag of $6,500 this year.

Inside the display, a new snowman keeps warm by a campfire while Santa Claus waves to visitors.

Last year, the city dipped into a $25,000 yuletide budget to buy the rest of the ornaments that make up the display, Mendez said.

For more than two weeks, he said, 12 members of the parks department worked to set up the display.

“We buy these already made,” Mendez said. “They come in pieces. The crew assembles them and attaches light bulbs to the wiring harness.”

On a hill, the display spells out Merry Christmas across 25 feet.

“We want kids to have a very memorable experience,” Mendez said. “We try to make it a memorable event for the kids and parents, so they can talk about it for years.”

4,000 – estimated crowd size at the lighting

Tens of thousands of lights were used to light up the hike and bike trail.