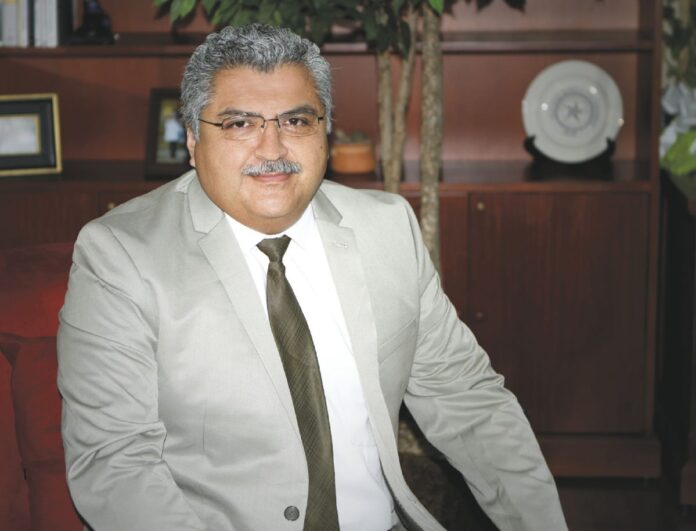 HARLINGEN — Rick Herrera first stepped foot on Texas State Technical College grounds when he was a student in the 1980s and he never imagined the success and the family he would find at the college nearly 20 years later.

Herrera is now TSTC Vice Chancellor and Chief Integration Officer and Interim Provost for the Harlingen campus — the highest local position. He was named interim provost in July.

For two decades, Herrera had a rewarding career in the manufacturing industry as a programmer, engineering manager, production manager and site director for a maquiladora plant in northern Mexico.

“At this point it was time to come back home and be closer to my children, so when the opportunity at TSTC presented itself, I took it,” said Herrera.

The jump from manufacturing to higher education in 2009 was a change for Herrera, but his knowledge and skill quickly moved him up the ranks.

“Coming from industry it was about working effectively and efficiently to meet stakeholder profit,” said Herrera. “At TSTC, it’s about working for the benefit of our students. It’s important to me that we help them fulfill their version of the ‘American Dream.’”

During his time at TSTC, Herrera has served as Director of Administrative Technology, Project Manager in charge of implementing TSTC’s statewide online learning management system and Associate Vice President of Technology Management.

In 2010, former TSTC Chancellor Bill Segura appointed Herrera as Chief Technology Officer before being promoted to his current positions of Vice Chancellor and Chief Integration Officer by TSTC Chancellor Mike Reeser in 2011 and 2017 respectively.

“Through the years and in my new positions I’ve had to reevaluate my leadership styles,” said Herrera. “All of my experiences have really opened my eyes to coaching, mentoring and guiding, communicating effectively and applying change.”

Herrera said as provost, internal and external communication is an integral part of his role.

“It is my duty and goal to always ensure that communication is effective to all parts of our organization so that we all work toward the same mission and goals,” said Herrera. “We’ve experienced a lot of change recently and have been fortunate to have employee support and voices to shed light on new or missed opportunities.”

In addition, Herrera said he will also continue to work hard to remain connected to the community and its industries.

“This type of connection is important to keep our programs relevant and ensure we offer those that are in high demand,” he added. “It’s important that we continue to meet the needs of our community and industry while remaining true to our mission.”

In his role as provost, Herrera will conduct outreach and meet with elected officials, economic development representatives, community and industry leaders and TSTC alumni to find out where TSTC can help and to build partnerships that will help the community grow.

For the past eight years, Herrera said being part of the TSTC family has been a great experience like none other.

“TSTC is a different kind of place,” he said. “The family-type atmosphere permeates all around whether you’re an employee or a student.”

Herrera said, by working together, TSTC will continue to support student success and make sure that everyone who steps through the college’s door will be trained and prepared to leave with a new or better-paying job in their field of study.