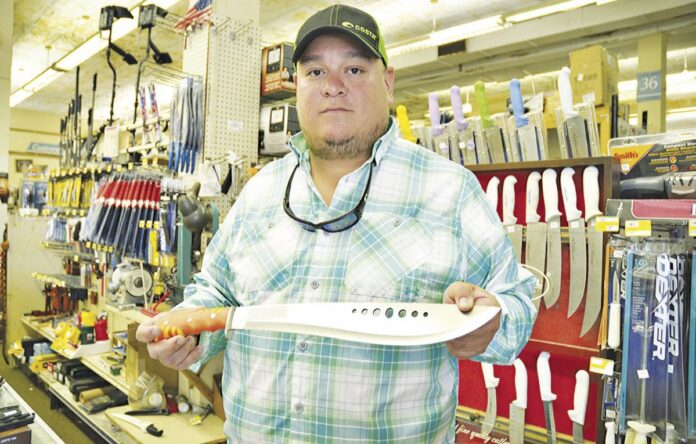 HARLINGEN — Not to put too fine a point on it, but the Texas everyday carry knife is about to become a whole lot bigger.

Come Sept. 1, decades-long restrictions on various knives which can be carried on Texas streets will be lifted.

For years, many Texans pointed out the historic hypocrisy of a state ban on carrying the massive Bowie knife, the signature weapon of Jim Bowie, one of the heroes of the Alamo.

Next month, Bowie knives with blades up to 24 inches become street-legal for carry, along with stilettos, poniards, dirks, daggers, kukris, swords and, perhaps the most ancient weapon of them all, the spear.

“First of all, size from now on doesn’t matter,” said John Paul Alvarez, a knife expert at Johnny’s True Value Hardware. “You can carry any size, even full-size. You could carry machetes.”

The experts at Johnny’s reckon they have the biggest knife selection south of San Antonio, and multiple glass-covered display cases filled with hundreds of different blades and styles seem to confirm it.

“Basically, it’s going to be the Wild West out here, anything goes — there’s no such thing as an illegal knife,” Alvarez said.

The new law will put an end to restrictions on blade length — the maximum to carry is 5.5 inches now — and on double-edged knives. While these knives are even now legal to purchase in Texas, they are not legal to carry on the street, only on your property, or hunting camp or your boat.

House Bill 1935, which Republican Gov. Greg Abbott signed into law, will impose some restrictions on where knives with blades exceeding 5.5 inches can be carried. Under the new law, carry can be open or concealed.

Schools, colleges and universities, churches, correctional facilities and bars where their income is more than 51 percent derived from liquor sales are still going to be no-go areas for big blades.

Todd Rathner is director of legislative affairs for Arizona-based Knife Rights, the group which played a pivotal role in passage of the new knife bill in Texas.

“We’ve been working in Texas since 2013 on incrementally fixing the knife laws there,” he said. “This one was important for symbolic but also for practical reasons.

“Symbolically, it’s been very important to us as well as a lot of Texans to finally make it legal to carry a Bowie knife, which is so important to Texas history,” he added.

“But the practical effect is that the illegal knives section of the code was absurd in a number of ways,” Rathner said. The definition of an illegal knife being one with a blade over 5.5 inches “was just some arbitrary number picked out of the sky.”

“It could incriminate anybody with a fixed blade hunting knife or a fillet knife who is out fishing because most of them have blades over five and a half inches,” he said.

Knife Rights also was involved in a previous, and successful, effort in Texas which removed restrictions on spring-assisted knives called switchblades in 2013.

Back at Johnny’s Hardware, Alvarez demonstrated a switchblade that will become legal to carry come Sept. 1. Called an out-the-front, or an OTF knife, the switchblade is currently banned because it has a double-edged blade that is more than 5.5 inches.

“And now the big thing is these OTFs, which were military and law enforcement only, because they’re double-sided,” Alvarez said.

“Standard hunting knives will now be legal as well,” he said. “Basically, anything you want.”

HB 1935 passed through the Texas legislative process with bipartisan support.

Many lawmakers noted a contradiction under current law which allowed the knives in question to be legally sold, but were illegal to carry in public. Simple possession of one of these types of knives in public is a crime, even if no actual crime was committed.

Other states are easing old restrictions on knives, too.

Last month, Michigan Gov. Rick Snyder, a Republican, signed a law lifting prohibitions on switchblade knives, which open via a touch of a button.

In New York, the state Assembly in June overwhelmingly passed a law legalizing so-called “gravity knives,” which open with a flick of the wrist (switchblades open via a spring). The law now goes to Democratic Gov. Andrew Cuomo for his signature.

For his part, Rathner said Knife Rights still isn’t satisfied with the restrictions on locations knife-owners can carry, and he expects to be back lobbying the Texas Legislature when it reconvenes in two years.

“We’ll try to get the restrictions lifted,” he said. “If you think about it, the idea that you can’t carry a blade over five and a half inches in a bar that’s an over 51 percent establishment from alcohol sales … there are practical effects to that.

“What about the cook, the chef, the gal that’s working in the back?” Rathner said. “They may have a roll of knives that are over 5.5-inch blades.

“What about somebody who just gets off work or on a hunting trip or fishing and they’re in the lodge and they’ve got a big knife on their belt?” he added. “Those people need to be left alone and not charged with a crime because they went in to have a beer.”

Those distinctions, he said, also can apply to churches as well. Technically, any chef or cook working in a church kitchen with a normal chef’s knife or deboning knife could be in violation of state law.

“If the church hires them to cater an event, and they bring that knife roll in, there is a technical violation of the law there,” Rathner said. “Is a LEO (law enforcement officer) in Texas going to enforce it? I don’t know.

“All it takes is one aggressive prosecutor who wants to prove a point, and you end up in a mess,” Rathner added.

At Johnny’s, Alvarez said the business already has plans for a brave new world in knife sales.

In addition to hunting knives, huge fish filleting knives and pocket knives, the store also sells a variety of chef’s and kitchen knives, too.

“We actually are considering bringing in swords here, too,” he said.

Knife Rights, the group that played a key role in lobbying for changes to Texas knife laws, is planning a rally the morning of Sept. 2 outside the Alamo.

A Knife Rights spokesman, Todd Rathner, said the rally still needs to be green-lighted by the City of San Antonio, but he said plans are a go as of now to gather that Saturday morning.

Describing it as a BYOB — Bring Your Own Bowie — Rathner said it will be a symbolic gathering of Texans to honor Jim Bowie, one of the heroes of the Alamo. His trademark namesake knife is one of the blades which will become legal to carry in the state on Sept. 1.

Blades over 5.5 inches cannot legally be carried in: