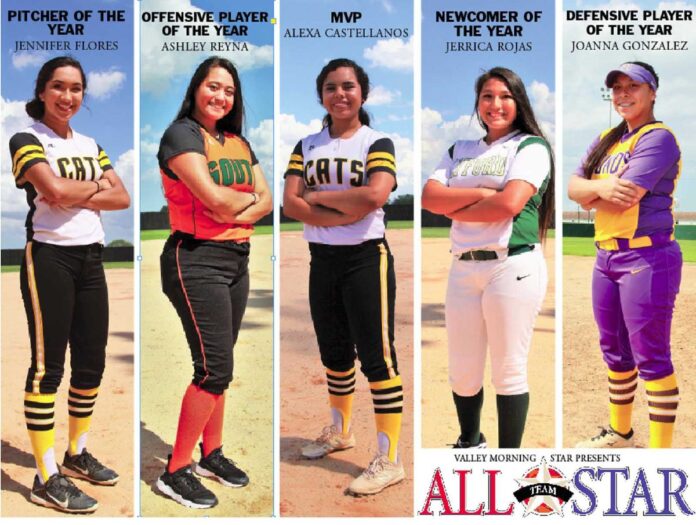 The shortstop position is arguably the hardest position next to pitcher.

Castellanos was tabbed this year’s Valley Morning Star All-STAR Most Valuable Player. Castellanos anchored the Rio Hondo defense with a .939 fielding percentage and a 74 percent put out rate as the everyday shortstop.

Castellanos also hit in the middle of the order and batted .480 while driving in 58 runs.

With the Lady Bobcats searching for a spark in their regional semifinal series against Wimberley, Castellanos stepped up and made play after play, and served as the vocal leader. Rio Hondo ended up winning in Game 3 and advancing to the region final.

“We knew that series was going to be tough,” said Castellanos. “Our team needed a leader and I knew as a senior I needed to step up and lead my team. Winning this award means a lot, I worked hard every year and to see it pay off, it’s a blessing.”

Pitcher of the year

Rio Hondo’s pitching was a key part in the team’s playoff run this season.

Senior Jennifer Flores served as the club’s ace and put forth a masterful senior campaign. Flores was named the All-STAR Pitcher of the Year.

“This was the most memorable year I’ve had,” said Flores. “I wanted to go out with a bang and this year was by far my best year I’ve had as a player. None of this was possible without my teammates. I knew I could trust my defense every time I pitched. Over my career I gained confidence, not only in myself but in my teammates.”

Flores finished the year with a 17-4 record in 93 innings of work while racking up 124 strikeouts. Flores also provided pop at the plate batting .463 with 50 RBIs.

Offensive Player of the Year

The 2017 Harlingen South club was loaded with underclassmen and was unsure of the direction the Lady Hawks would go.

Reyna batted in the cleanup spot and swatted six homers and 19 doubles while batting a staggering .615

Reyna was named this year’s All-STAR Offensive Player of the Year.

“I didn’t know my average was that high,” said Reyna. “I didn’t change my approach, I just kept swinging. I also had a great support system. The one thing I did work on was my mentality. Throughout the season I kept my mental game strong and focused. To win this award means a lot and it was my last year so I couldn’t have ended it on a better note.”

Defensive Player of the Year

After losing Kim Harper to graduation, San Benito coach Kristy Leal needed to find a catcher to replace her. The task was a tall one, but junior catcher Joanna Gonzalez was up for the challenge.

Gonzalez was named this year’s All-STAR Defensive Player of the Year.

Gonzalez made the switch from third base to catcher and directed traffic from behind the plate. Gonzalez finished with a .944 fielding percentage while committing only one error through 32 games.

“Once Kim graduated, I knew I was going to have to step up and be ready,” she said. “At first it was hard adjusting to a different position, but I was able to get it all down. I thank my coaches for that. It was harder because catcher takes a lot of work and I was now responsible for leading the defense. However it has been fun to play catcher because I like the tension.”

Newcomer of the Year

It’s not everyday one sees a freshman take over and dominate at the varsity level. However, Lyford freshman Jerrica Rojas did just that in 2017.

The star-studded freshman played both pitcher and third base for the Lady Bulldogs. Rojas was tabbed All-STAR Newcomer of the Year.

“It’s an honor to win this award,” she said. “All season long, I just went out there and played my game.” I still have three years ahead of me and I’m ready to get back to work. This year I learned a lot from the seniors and juniors, and without them this wouldn’t be possible.”

Rojas led the club in hits with 47, a .566 average and 45 RBI. Rojas also played a vital role in Lyford’s unbeaten district season along with a trip to the regional quarterfinals for the first time in program history.

Coach of the Year

The Rio Hondo Lady Bobcats reached new heights in 2017. Not only were they the last Valley team standing in the playoffs, but they reached the regional final for the first time in program history.

Rio Hondo’s magical season was led by a core of five seniors and a veteran coach in Brett Esparza.

Esparza guided the Lady Cats to a fourth consecutive district title and in his sixth year as head softball coach, Esparza has amassed 144 wins. Esparza is this year’s All-STAR Coach of the Year.

“This year was special and this year’s group of kids was special,” he said. “This group has been a part of my family’s life for a long time. I had them for class when they were in junior high and they would always want to talk softball with me. That’s when we realized that this group was special.

“As a coach you always want to have an impact on their lives and guide them. Winning this award is a reflection on how hard the kids worked and it’s really special to see these kids grow up and the impact they have had in my life.”