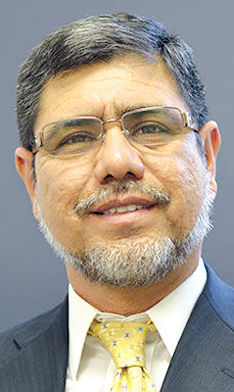 MERCEDES — Ricardo Garcia has retired as city manager of Mercedes nearly two months after commissioners unanimously voted to place him on unpaid suspension.

Garcia said on Friday that he’s informed city officials via correspondence. City Attorney Juan Molina confirmed receipt of the retirement letter and noted that it will take effect on Wednesday.

“Given the circumstances, and obviously with no pay, this was the only option I had in order to generate income,” Garcia said of his decision to retire, which comes after 31 years of employment with the City of Mercedes. “It wasn’t my intent necessarily, but that’s what I needed to do.”

His suspension led to a lawsuit that Garcia and his wife, Dahlia Garcia, filed against the City of Mercedes, Mayor Henry Hinojosa and Commissioner Ruben “Chano” Guajardo. Leo Villarreal, a runoff candidate for the Place 1 commission post, is the other defendant named in the suit.

Among the allegations levied are defamation, conspiracy and violating the Texas Open Meetings Act — this for the agenda on the March 30 special meeting, the one in which Garcia was suspended, failing to indicate that the commission planned to vote on the city manager’s employment.

As previously reported, the accusation of conspiracy stems from Garcia’s belief that Hinojosa, Guajardo and Villarreal met at the Sunrise Café in Weslaco to plot against the city manager in a “ploy to deflect criticism.” The criticism cited in the lawsuit refers to the accounting discrepancies that were at the heart of Garcia’s suspension.

These discrepancies consisted of the city’s payment of more than $35,000 in utility bills for the Texas Valley Communities Foundation, which occurred over nearly five years.

Both Molina and Garcia have referred to the matter as a case of human error that stemmed from an old city meter that was not transferred to the foundation, which operates from the formerly-owned city property at 1098 W. Expressway 83 in Mercedes.

Although Garcia’s suspension was pending a special audit, the findings of which have yet to be presented to the commission. Meanwhile, assistant city manager Daniel Tijerina continues to serve as the head administrator for Mercedes in a temporary capacity.