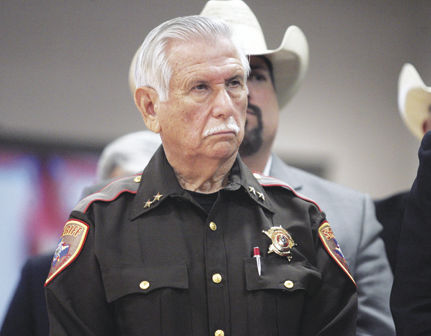 BROWNSVILLE — Cameron County is made up of 1,262 square miles, 300 miles of waterways, four bridges and three water ports.

With a population of 420,392, Cameron County is the eighth largest county in the state of Texas.

“This agency should have at least close to 140 deputies. Some may dispute that, but … we are shorthanded and don’t have enough people to cover the county at all times,” Sheriff Omar Lucio said. “We don’t tell people how we do it because we don’t want them knowing.”

Deputies are dispersed throughout the Sheriff Department’s five divisions: the patrol division, the special investigative unit, the investigator division, the civil division and the traffic division.

Others run the office, and prepare budgets and work schedules.

The deputies need their vacation time and sick leave. They cannot always be expected to work overtime, Lucio said.

“If you work overtime, you work 12 hours a day and you get fatigued. You get tired. We want our officers to be alert, and we also want them to be spending time with their families,” Lucio said. “I think law enforcement has the highest rates of separation or divorce, and we want our officers happy.”

During the past three years, the Cameron County Sheriff’s Department has lost 45 deputies and 302 detention officers, including nurses and support staff. Most do not even stay long enough to get licensed, Lucio said.

“You can’t blame these people. They need better pay, they have a family and they try to better themselves for their family,” Lucio said.

According to job postings on the Cameron County website, deputy sheriffs make $32,263 per year, detention officers make $28,455 per year, and dispatchers make $26,087 per year.

In comparison, Brownsville police officers make $30,739 as probationary officers and $41,196 as patrol officers.

“We need to stem the flow of folks leaving to Border Patrol or the Brownsville Police Department . We end up investing quite a bit of money to train them, and then they see an opportunity and leave for the Department of Public Safety,” County Commissioner Pct. 2 Alex Dominguez said.

In the long term, raising the salaries of the deputies at the Sheriff’s Department might save the county tax dollars that normally would be spent paying for overtime and trainings, Dominguez said.

Lucio said the county pays out approximately half a million dollars in overtime a year.

Prior to Eddie Trevino Jr. taking office as county judge, Dominguez said he and former County Commissioner Pct. 4 Dan Sanchez were the ones pushing for more pay for the officers.

The difficulty is in balancing the budget around those raises, especially when raising taxes should be considered a last resort, Dominguez said.

Trevino mentioned the Sheriff’s Department’s dilemma during his swearing in speech. The reality is that the high turnover must be addressed with a more competitive salary, he said.

“What we’re realizing is when you’re young, you’re not worried about the long-term benefits and more interested in the actual take-home,” Trevino said. “… For each of these individuals, we invest time and money to make sure they are trained and educated, and if we keep losing them in the short-term, it ends up costing more and more money.”

Trevino said more research is required before the county can determine what possibilities to consider. He has had conversations with the Sheriff’s Department about pay, he said.

Another concern is Senate Bill 4, the “sanctuary cities” legislation recently passed by the state. It would require local law enforcement to assist in enforcing federal immigration law.

“This is exactly why you had every police chief in the state publicly saying that it was not (a) good law enforcement statute, and it is the reason why we have federal-trained officers,” Trevino said. “Local law enforcement is trained to enforce local law: domestic violence, theft, homicides, everything we deal with on a daily basis. We don’t have federal agents involved in local crime issues. … It’s an unfunded mandate forced on local law enforcement.”