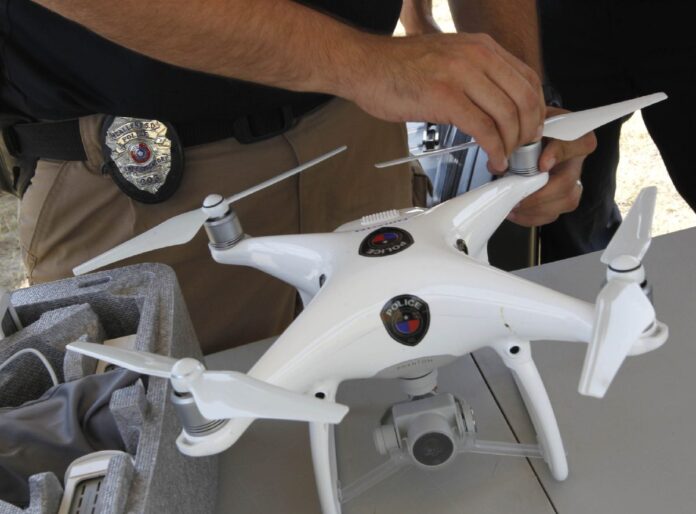 Friday, the officers had their final exam on completing would-be scenarios of search and rescue. Their drone skills were tested on finding a missing child/endangered adult and identifying an unknown object, a skill that could help diffuse a bomb scare. Another mission was going through hazardous materials like an ammonia leak from a car.

Gene Robinson, vice president, co-founder and flight team director of Drone Pilot, said the officers learned to problem solve and jointly worked together in their missions.

“They (officers) will use the skills that we taught them, go out and try to solve,” Robinson said.

The drones will be used for faster response times and be used for investigative purposes to hold aerial views of parking lots, reconstruct collisions, look for evidence/crime scenes, and assess structural damage to buildings after a natural disaster or arson and most commonly, locate intruders in and around campuses.

“This training will be good for the public to keep them safe,” McAllen ISD Police Sgt. Charles Eric Treviño said. “When you look at it at ground level, it doesn’t look the same when you take it at aerial photographs. It’s different.”

“It’ll take minutes versus possible hours bringing an agency to check it out,” Treviño added about response times.

The drone training was divided into three phases. The introductory section covered legal issues and copyright information. Section two, covered the proper usage of equipment and regulations with recording and documenting the missions on logbooks. The final section was team cooperation and following proper procedures before beginning a mission.

Government use of aerial drones became much easier when the Federal Aviation Administration flipped the switch on new regulations last year, prompting some law enforcement agencies to adopt the technology.

The San Marcos Police Department has purchased a drone that will be used for investigations into vehicle crashes involving serious injury or death.

Before the FAA created new regulations last summer, the Austin Fire Department had already been operating drones to monitor and respond to wildfires for more than a year under a rare exemption that made it one of the first public safety agencies in the country allowed to use drones.