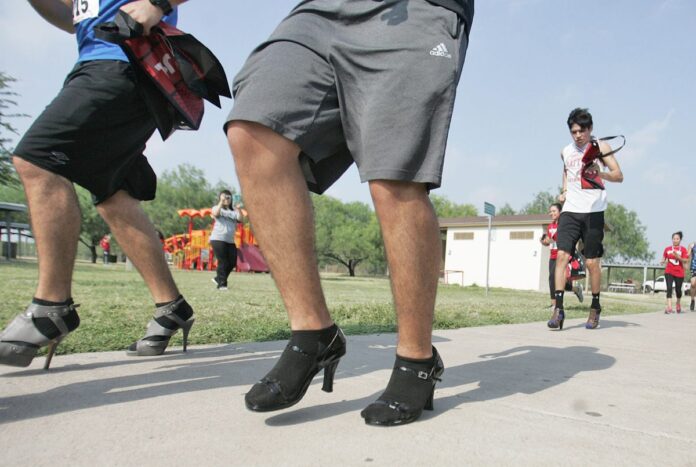 EDINBURG — Stop the violence in the community was the message of the Mujeres Unidas/Women Together 8th Annual Run/Walk and High-Heel Challenge on Saturday at Edinburg Municipal Park.

The event, appropriately called Walk In Her Shoes, had men walking, or trying to walk, in heels as part of a community-based effort to draw attention to the issues of women and family violence.

Nelda Hernandez, Mujeres Unidas volunteer coordinator, said they sought men to participate so they could see what women go through and become motivated “to stop the violence.”

The high-heel shoes were by donated for the event and came in various sizes styles. Men could only hope to find a pair that would fit them for the walk around the park.

Mark Arteaga, 25, of McAllen, participated for the first time in the challenge as part of the Lacks Striders team and chose his heels based on comfort.

“I did it to show support of women and those who have been abused,” Arteaga said.

The event was one of many around the nation marking April as Sexual Assault Awareness Month.

In Texas, 4.2 million women and 2.1 million men have experienced some form of sexual assault in their, according to a report by The University of Texas at Austin, School of Social Work.

Mujeres Unidas is a nonprofit organization that began in 1978 dedicated to providing support services to victims of domestic violence and the survivors of sexual assault. They also offer educational and prevention programs to the community.

Mission resident Carlos Villarreal also participated in High-Heel Challenge for the first time to show support on the issue and was himself a victim of domestic violence.

“I never realized there was support for the gay community — Mujeres Unidas rocks,” Villarreal said about being a survivor.

Gustavo Correa, 23, of Alamo, who was also a first-time participant, won the High-Heel Challenge. He received a trophy decorated with a part of heels and mentioned that his legs hurt after doing the walk.

“I feel women should be empowered to stand-up for themselves and sometimes they don’t feel empowered, so we’re here to encourage them.” Correa said about joining the challenge.

Volunteers from various companies participated in the walk or as cheerleaders to encourage the competitors, including representatives from GAP, Kohls and Sierra Title Company, among others.

For more information on Mujeres Unidas, visit www.mujeresunidas.org or call their McAllen office at (956) 630-4878.