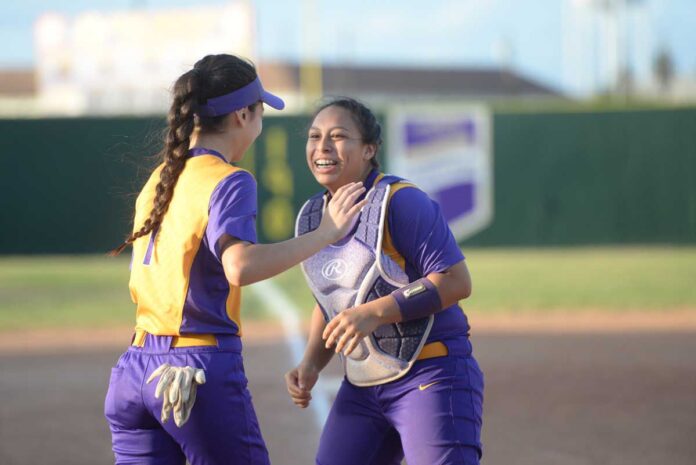 Those three words are on the back of the shirts of the San Benito softball coaching staff and they are words that head coach Kristy Leal has deeply instilled in her players.

The Lady Greyhounds are entering the 2017 postseason with a chip on their shoulder and have set their sights set on a very deep run.

Their journey begins tonight when Edinburg Vela travels to San Benito to begin a best-of-three series in the Class 6A bi-district playoffs.

The two squads met back in early March with San Benito earning a 3-1 non-district win.

Fast-forward to the present and both teams are different from what they were when they last faced off.

“We were fortunate to play them earlier this year, and we are aware of what they have. There won’t be any surprises.” said Leal. “They have some tough pitching and can hit the ball well. The Valley has great pitching all around and Vela is right up there with the best. It’s going to be a dog fight and we know that. It’s the playoffs and it’s a different picture and game. We’re just trying to prepare as best as possible.”

Vela enters the playoffs on a roll. The Lady SaberCats needed a win against PSJA High to clinch a playoff spot in District 31-6A then had to win a coin flip with PSJA Memorial to decide who would claim the four and three seed.

Vela is in its fifth year of existence and has clinched a playoff berth each of those years. Last season, Vela won its first bi-district title before falling in the area round.

Meanwhile, San Benito is looking to get past the bi-district round after last year’s rare first-round exit against PSJA Memorial.

San Benito only lost one starter to graduation during the offseason in catcher Kim Harper, but everyone else is back and eager to right last year’s wrong.

This season, the Lady Hounds finished district play at 12-2 and have the experience of big games under their belts.

The Lady Hounds turned to their senior hurler Diandra Padilla along with a strong group of sophomores that have stepped up.

Sophomore and leadoff hitter Sarah Garcia provides pop at the top of the order to go along with a solid glove.

Junior catcher Joanna Gonzalez and sophomore outfielder Alina Jasso have also been key this season. Gonzalez made the move from third base to catcher and has been a driving force behind the dish. Meanwhile, Jasso has done a stellar job patrolling right field.

“Last year was last year and this year we have been taking it one game at a time,” said Leal. “The kids have earned a chance to be in the playoffs, and the kids are excited and hungry to be back. This year we have a strong group of seniors that have helped lead the team. We’re excited for the opportunity to be back in the postseason and I know the kids are ready for it.”

NOTE: This is the first-ever playoff meeting between San Benito and Vela.