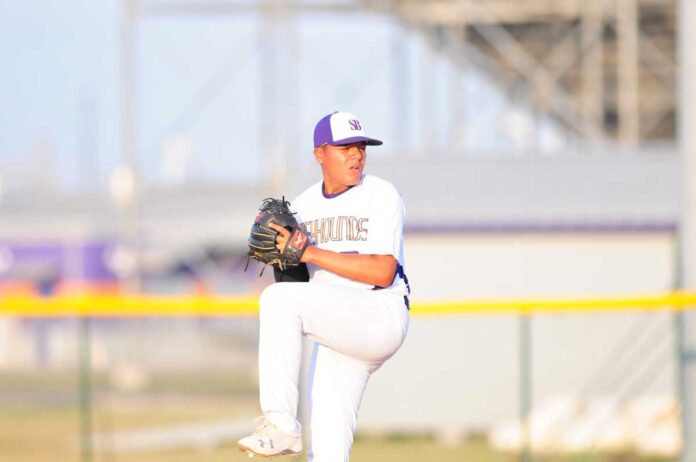 SAN BENITO — Despite going hitless for the first three innings, Harlingen managed to hold a 1-0 lead via a passed ball in the first inning.

The baseball gods had other ideas for San Benito.

San Benito’s offense erupted for a three-run third and five-run fourth inning as San Benito wrapped up the regular season with an 11-4 win against the Cardinals on Tuesday night.

“When you play with pride, no matter the outcome, nobody can take that away from you,” said San Benito coach Ramiro Partida. “Our boys came out with a lot of pride and we had a great outcome. I’m proud of them for ending the season with a win.”

Baseball can be a funny game indeed.

In the third and fourth innings, San Benito’s Nate Garcia got the offense going. Garcia led the offensive showcase going 3 for 3 with four RBIs, a walk and two runs scored.

Harlingen had already clinched a playoff berth, but that wouldn’t change the mindset heading into Tuesday’s game.

Bryan Quintanilla gave the Hounds a 3-1 lead in the bottom of the third inning on an RBI double.

San Benito followed up in the fourth inning by batting around and scoring five runs on six hits.

Four of the five runs in the fourth inning came with two outs. Alejandro Ybarra and Jerry Delgado picked up consecutive base hits and later scored, capping off the big inning for San Benito.

The Hounds added three more runs in the fifth inning to pull away 11-3.

“We had a little talk in the dugout, I told them we have opportunities to score, we need to score, and we managed to put runs up on the board,” said Partida.

Harlingen (9-5) will now shift their focus to the postseason and will be the third seed out of District 32-6A. The Cardinals will face either Edinburg North or PSJA High.