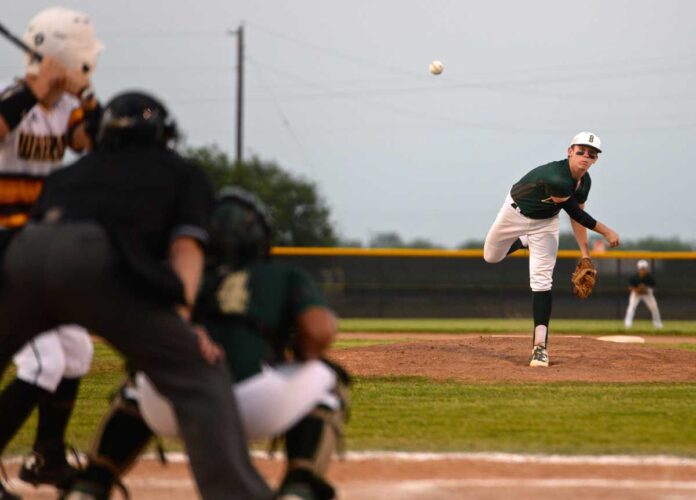 SANTA ROSA — It may have taken a little longer than Lyford might have hoped for, but after 22 years the Bulldogs won their first district championship since 1995 on Tuesday evening at Warrior Field. At least a share of it.

The Bulldogs will travel to Edinburg to take on IDEA Quest this Friday in their regular-season finale where a win will win the league title outright. However next Friday they will travel to Kingsville to take on Santa Gertrudis at 7 p.m. at Texas A&M Kingsville in a one-game playoff.

“This is a big win for us because this was one of our goals that we set earlier in the year,” said Lyford coach Chris Cervantes. “And to be able to accomplish this goal with the group of guys that we have is very exciting for the seniors since we haven’t won a district championship since 1995.

“So for us to be able to win is big and I’m very proud of the program.”

Jaime Cortez started the scoring for the Bulldogs. The second baseman crossed home plate after Andre Ibarra hit a sacrifice fly to center field to give Lyford the early lead.

However, the Bulldogs scored again after Andrew Reyna hit a line drive to right field bringing in Sam Rocha.

In the second inning, Lyford got on the board again after first baseman Abel Gonzalez hit a triple to center. Gonzalez would come screeching across home plate a few pitches later due to a passed ball, making the score 3-0 in favor of the Bulldogs.

The Warriors got on the scoreboard in the third after a Bulldog error. Francisco Figueroa crossed home to cut Lyford’s lead down to 3-1.

But Lyford responded with a score of it own in the top of the fourth. Jared Stroud singled to drive in Alfonso Garcia to put the Dogs up 4-1.

“Overall, I think we performed well, but obviously there are things that we need to correct,” said Cervantes. “The kids took care of what we need to take care of and gave a lot of energy.”