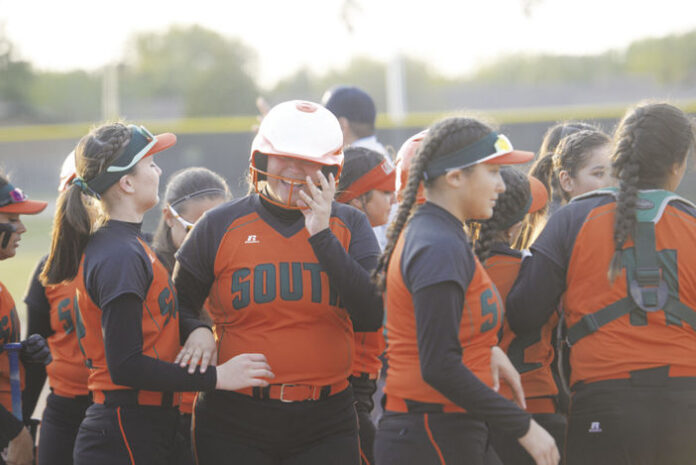 HARLINGEN—The Harlingen South Lady Hawks are back in the softball postseason for a second consecutive season under second-year coach Elias Martinez.

“It’s the playoffs and not every team makes it in, and we are one of the teams to get in.” said Martinez. “The girls are enjoying it. They know that it’s a new season and that records go out the window. We’re excited to be here. I told them anything can happen and that anybody can beat anybody on any given night.”

Harlingen South gutted out a 9-5 District 32-6A record to secure the third seed out of their conference. After falling short against San Benito and Weslaco, South responded with back-to-back wins and clinched its playoff spot with a win against Weslaco East on April 13.

Thursday night’s matchup won’t be the first time the two have met. Both clubs faced off twice in tournament action this season with Edinburg North edging out South in both meetings.

South has the pieces in play this season to go on a deep postseason run. Their opponent, however, is as tough as they come. Last season Edinburg North was one of the last two teams standing in the postseason and advanced all the way to the regional quarterfinals before losing to New Braunfels Canyon.

“Edinburg North is a well-coached team,” said Martinez. “They have a lot of kids back from last year’s playoff run. It’s going to be exciting playing them. Our kids our ready and feel confident going into the playoffs.”

The past two postseasons have ended a bit disappointing for the Lady Hawks as they fell in the opening round to Edinburg High each time.

Last season, they lost in a best-of-three series 2-1. The Lady Hawks actually won Game 1 of the series but dropped the next two games 6-3 and 10-7, respectively. In 2015, meanwhile, they got swept by the Lady Bobcats 2-1.

The last time the Lady Hawks advanced past the bi-district round came in 2013 when South made it all the way to the regional semifinals where they lost to Smithson Valley.

2016 – Lost Edinburg High in bi-district round

2015 – Lost to Edinburg High in bi-district round

2014 – Lost to McAllen High in bi-district round

2010 – Advanced to area round; lost to Eagle Pass Winn

2007 – Lost in bi-district round to Weslaco High