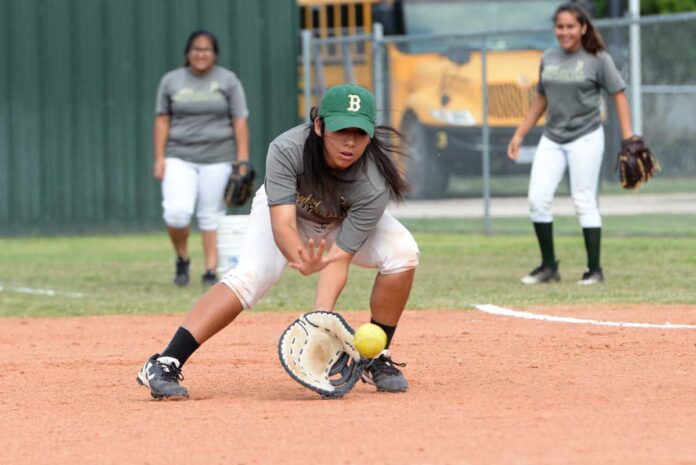 LYFORD — Coming into the 2016-17 softball season, the Lyford Lady Bulldogs had a motto: “Leave it better than you found it.”

That was the motto coach Joey Rios wanted his team to embrace. Rios is in his fourth year as the Lady Bulldogs’ softball coach after serving as an assistant for two seasons.

Last season, Lyford endured an early playoff exit against Bishop in the bi-district round. This season the Lady Bulldogs are a perfect 8-0 in District 32-3A with one game remaining against Santa Rosa tonight. The Lady Dogs also clinched their first district title under Rios, and have their sights on the postseason.

“We have a good program in place here,” said Rios. “We try and do the little things correct and play fundamental ball. Our drills are all fundamentals; that’s what we work on every day to get better. Our goal coming in was to win district. Last year we ended our season at 7-13; it was a building block for us. Some of the younger kids who came in last year have stepped up for us this year and the chemistry is a big part of our success.”

Offensively, Lyford plays small ball and uses the speed at the top of the order starting with senior and four-year letterman Kyndra Brown, who plays center field and is one of five seniors on the club. Brown is batting .339 on the year and leads the team in runs scored with 21.

“The past four years have been great,” said Brown. “I’ve been able to experience different things at the varsity level and how tough it can be. This year we have a lot of underclassmen and we are all in sync with each other. We have a strong bond, and everything clicks.

“As a senior it’s important for us to help guide the younger girls, but we’re excited for the next challenge on Friday and we’ll get ready for the playoffs once the regular season is done.”

Fellow senior and third baseman Sandra Lupercio leads the team in triples with three and singles with 15 to go along with an impressive .473 batting average.

“This year has been amazing. Winning district was one of our goals and we accomplished that,” said Lupercio. “Coach never gives up and that has motivated us to get better each day. He has taught me a lot both on and off the field. We are blessed to have him as our coach.”

It’s not often a freshman steps in and has an immediate impact on a team. But that’s not the case with Jerrica Rojas, who is a force inside the pitcher’s circle and at the plate. Rojas is the club leader in hits (31), doubles (15), home runs (4), RBIs (32) and batting average (.554).

“The speed of the game is definitely a lot faster at the varsity level,” said Rojas. “At the plate it was a challenge at first; the pitchers are more crisp with what they throw. When I go out there I clear my head and I play like I know how, and what I’ve been taught.”

In the circle, Rojas has found her form with an arsenal of pitches, including a rise ball, screwball, changeup, drop ball, an offspeed pitch and a curveball. Rojas’s go-to pitches are the curve and changeup. She boasts a 7-1 record with a 1.65 ERA to go along with a team-high 73 strikeouts through 50.2 innings pitched.

Rojas is one of two pitchers that Rios will turn to. The other is junior Evelyn Ortiz, who has worked 42.1 innings, fanning 43 to go with a 3.14 ERA.

“Evelyn and I rotate; she and I work well together. When she pitches, I’ll play second base. We both have had a great season and we feed off each other’s energy,” said Rojas.