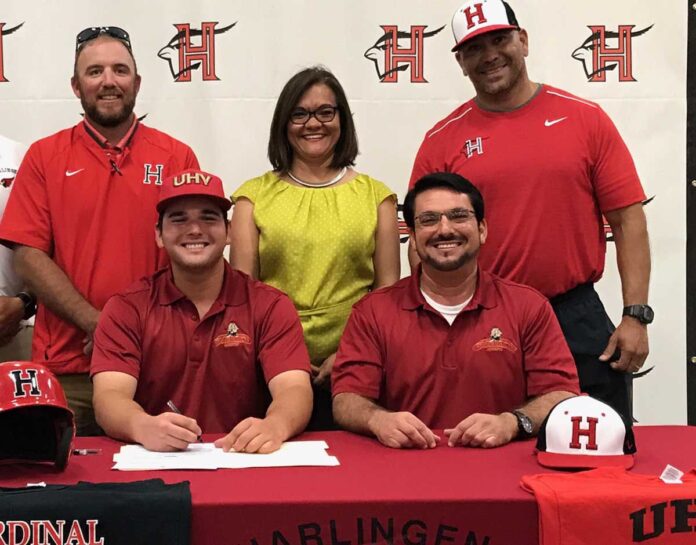 HARLINGEN — Harlingen High’s Alex Hinojosa III has always wanted to play baseball at the next level, and now the three-year varsity member will get to do just that as he signed a letter of intent Thursday to play at the University of Houston-Victoria next year.

“This has always been a goal of mine,” he said. “I never got any awards, but that was OK because it made me work harder and get better at my game. I’m excited for the next opportunity, although it’s no time to relax. We have a big game against Hanna tonight and we’re ready to get back to work.”

Baseball has always been a part of Hinojosa’s life. In fact, when he was 9 years old he was the bat boy for the Rio Grande Valley WhiteWings.

He grew up around the game, watching batting practice, taking in the atmosphere and he would even get tips from Wings skipper Eddie Dennis.

“It was fun times, watching the WhiteWings play. I learned a lot from those guys by being around them almost every day. It’s a small world because they played at Harlingen Field and that’s our home field now, so I’ve always known Harlingen Field,” he said.

After spending his freshman year at Brownsville St. Joseph, Hinojosa transferred to Harlingen High and made the varsity squad his sophomore year.

“Our biggest hole we will have to fill is on offense and Alex is one of those guys. He also has been a leader for our team,” said Harlingen coach Bryan Aughney. “My advice to him is to keep his head down, stay humble and keep working hard. He’s a great kid and he works his tail off in both the classroom, and on the baseball field. I think he definitely has a great foundation for success.”

Hinojosa expects to play right away for UHV at the first base position, which he currently plays for the Cardinals. He currently bats fifth in the order and is hitting .280 with 14 RBIs. He also provides a solid glove with a fielding percentage of .991 and he’s only committed one error all season.