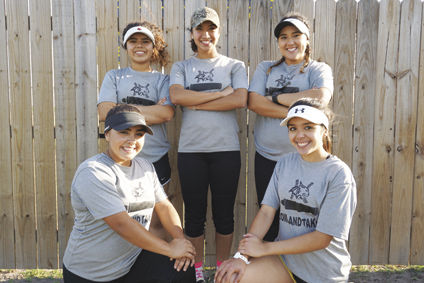 RIO HONDO — On Saturday morning Rio Hondo coach Brett Esparza tweeted out, “I still remember the first one” along with an article on Rio Hondo winning their first district title under Esparza. The tweet served as a reminder to stay hungry, and focused.

Four-year letter man Jennifer Flores read the tweet, and the message was received. “It was a good reminder, to see that from my freshmen year to now on how far we have come,” said Flores. “We have all played together since we were little, so coming into high school we knew we had something special. We have five seniors, and we don’t see the underclassmen, as underclassmen. They are very good listeners when we guide them in different situations, and they have stepped up big this season.”

Flores entered her senior season not expecting to pitch as much as she expected after suffering a wrist injury to her throwing hand over the summer. Flores overcame the injury, and has been a force in the circle along with fellow senior, Miranda Martinez. Flores has posted a 7-1 record, along with a dazzling ERA at 1.92, Flores uses a rise ball to go along with a screwball that’s used as a two strike pitch.

“I wasn’t expecting to pitch as much this season, but this year has been one of my best seasons yet,” said Flores. I like to use my riser, and mix in my screwball to throw batters off. Miranda and I work well together, as team. We pick each other up, and make each other better.”

“We have had kids come and go, but the mentality and work ethic has always been the same, and that’s a big reason for our success over the last four years” said Esparza. “We have a great group of kids, they come ready to work. We are such in the moment type people that we don’t realize what had just happened, because it’s what we have been wanting to do, and we know we want more, we want another bite of the apple.”

Junior and cleanup hitter Bianca Cruz has provided the pop for the Lady Bobcats. Cruz leads the club with 44 hits, and four homers. Cruz bats fourth in a lineup that produces plenty of runs, with a combination of speed and power.

“It’s a great honor to be a part of this team, we all gel together, and we pick each other up when someone might be having an off night. Our experience is going to help us when we get into the playoffs, we are hungry and want more. We are always focused, we get off the bus with our partner and walk in two lines with our headphones on, it can be intimidating, but we go into every game focused and ready to play,” said Cruz.

Rio Hondo will wrap up the regular season with games at Zapata and Port Isabel, before the Lady Bobcats enter the 2017 postseason.