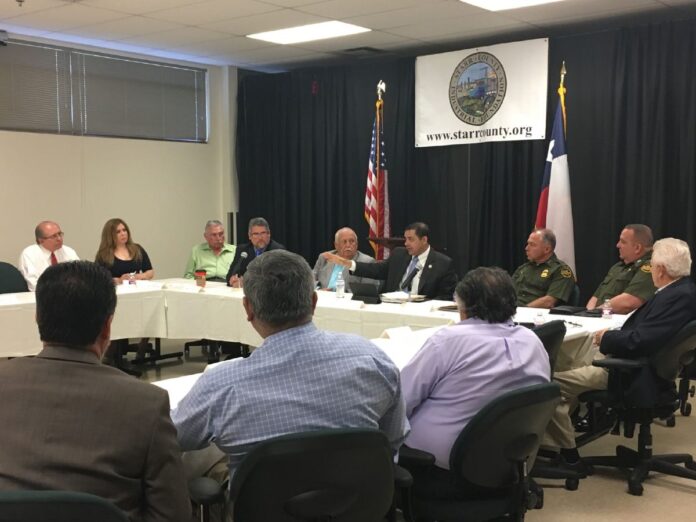 RIO GRANDE CITY — Under pending escalation of border security, which President Donald Trump called for throughout his campaign and presidency, local officials throughout Starr County were given the opportunity to voice their concerns.

“We want to make sure that we leave the decision as to how we provide border security, with the local input, to these men right here,” Cuellar said referring to the Border Patrol agents. “To make sure that they make the decisions and not some Washington politician up there.”

The event, hosted by Cuellar and the Starr County Industrial Foundation, was the first of a series to be held quarterly.

“There was really no communication,” he said about the condemnation process almost 10 years ago. “They never did come down and talk to any of us, the property owners.”

Benavidez’s 150-acre property, which was given to his wife’s family through a Spanish land grant in 1767, sits on the river.

He said that besides believing a border wall to be unnecessary, he said it would harm the ecosystem there.

“We’ve got all kinds of birds in there, we’ve got bobcats, we’ve got squirrels, we’ve got beautiful butterflies that come in here,” he said.

Padilla, the Border Patrol chief, said they were in the process of assessing the land and the environment.

“We have identified our hot spots and what areas we need but from a very Border Patrol perspective,” Padilla said.

“Now we need to have the engineers look at the erosion of the land, look at where it’s buildable or not buildable, what technologies work best, so we’re in that phase right now (of) actually having some smart people look at it through very specialized eyes.”

Padilla said the Border Patrol was implementing the lessons they learned when land was being condemned in 2008 and were working on communicating with local residents.

Rose Benavidez, president of the Industrial Foundation, requested that leaders in economic development also be included in the conversation and suggested that new construction, whether industrial or commercial, could also serve as barriers along the border.

“One of potentially the misconceptions that we hear from people from across the nation is that we don’t support border security and that actually couldn’t be further from the truth,” she said.

“We’re looking to make sure we have a community where investment is possible and where there’s confidence not just with the investors but the consumers.”

Benavidez, the landowner, said he wasn’t putting up a fight when it came to his property but still felt it was necessary for him to voice his concerns.

“This is just a discussion that needs to happen,” he said. “It should have happened ten years ago and it didn’t.”