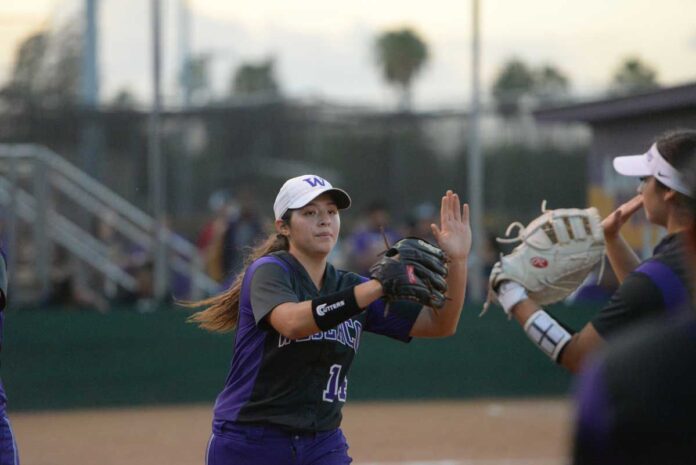 SAN BENTIO — Early errors proved to be too much for San Benito. Weslaco took an early 2-0 lead and held on for a 6-3 win in an all-important District 32-6A tilt.

Weslaco improved to 12-1 in league play and split the season series against San Benito. The Lady Panthers also jumped a game ahead of San Benito, and can win outright league title with a win against Los Fresnos on Tuesday. Weslaco also extended its win streak to seven games.

San Benito saw its win streak snapped at seven and fell to 11-2, and will end their regular season against Harlingen on Tuesday.

“It’s always fun to come in here, and play,” said Weslaco coach Mario Rodriguez. “Both crowds travel well and I thought our kids came out and played good softball against a very good San Benito team.”

“After that home run, reality set in for me,” said Tafolla. “We knew they could swing a good stick, I settled down quick and let my defense work. It’s great to pick up this win, especially with the playoffs coming; we want to be ready to roll.”

Weslaco capitalized on the early miscues from San Benito in the first and third inning, giving them an early 3-1 lead after three innings.

Sophomore Sarah Garcia provided the offense for the Lady Hounds going 3 for 4 with a pair of home runs. Garcia’s second dinger came at a crucial point in the bottom of the fifth inning, trimming the score 5-3.

Sophomore Ashley Sada entered the game in relief of Tafolla in the fifth inning. Sada, like Tafolla, allowed a home run to the first batter she faced, but quickly settled down and kept San Benito at bay.

“At first I was disappointed because I gave up that home run,” said Sada. “My defense was able to pick me up after that and my rise ball worked for me tonight, and I threw in a couple screw balls to keep them off balance. After getting the final out, it felt amazing. It’s a big win for us.”