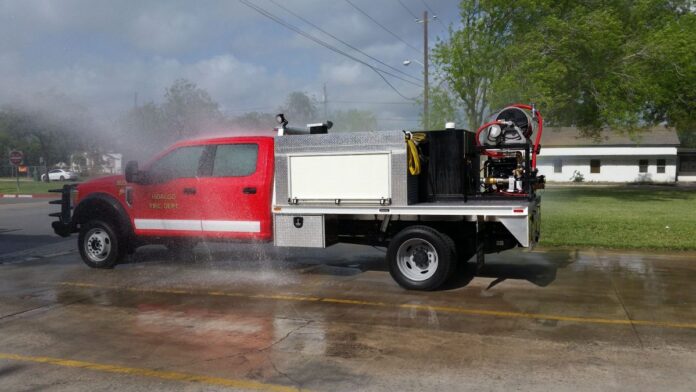 Hidalgo firefighters doused the $90,000 truck with water Friday morning and then pushed it into the bay as a way of christening the city’s newest fire-fighting tool.

“The fire truck means a lot to the City of Hidalgo,” City Manager Julian Gonzalez said. “Whenever we’re not doing our own fire protection and prevention, we’re assisting other cities through a cooperative agreement with the county.”

County leaders played a crucial role in gifting the truck.

Every year, Hidalgo County receives grant money from the U.S. Department of Housing and Urban Development (HUD). HUD’s Community Development Block Grant — a program most commonly referred to by its acronym as CDBG — sends Hidalgo County millions of dollars each year to help with infrastructure and other community-based projects in small rural areas.

The county’s Urban County department oversees the funds, but county commissioners for each precinct decide how the money should be spent in each of their respective regions, said Diana Serna, executive director of the Urban County program.

“They get to decide what they get to do with their funding,” Serna said.

For Hidalgo County precinct 2, Commissioner Eddie Cantu decided an additional brush fire truck was among the needs of his constituents. At the time, the area near Hidalgo had been flooded with calls regarding brush fires. A burn ban and a wind advisory had created hazardous conditions for the area, Serna said.

“They’ve got a lot of rural area there, and it’s something that is going to be utilized to help the community,” she added.

The truck is smaller than the usual fire engines, but it can get into hard-to-reach territory.

“It can go into areas that are not paved,” Gonzalez said. “It’s got features that an all-terrain vehicle would have.”

Community leaders praised the CDBG monies that have allowed the county to help all but four cities carry out much-needed services, including drainage improvements, sewer line installations and the construction of parks. Only McAllen, Edinburg, Pharr and Mission do not qualify for the grant money.

Earlier this week, however, the Trump Administration announced it was looking at cutting the budget for HUD by more than 13 percent and/or the elimination of the CDBG program, Serna said.

And while the program has seen cuts in recent years, they haven’t been as drastic. Ten years ago Hidalgo County would receive about $10 million. Today, that figure is down to $7 million.

“They’ve always threatened cuts,” she said. “But for some reasons now it seems to have more backing.”

Serna urged residents to call their local, state and federal lawmakers to speak out against the cuts.

“Call them and tell them that CDBG is a grant that helps many low-income people, and that we would like their support,” she said.

Serna worried what would happen if the program was done away with.

It would be devastating to Hidalgo County and across the nation,” she said. “We have done some many worthwhile projects with these funds.”