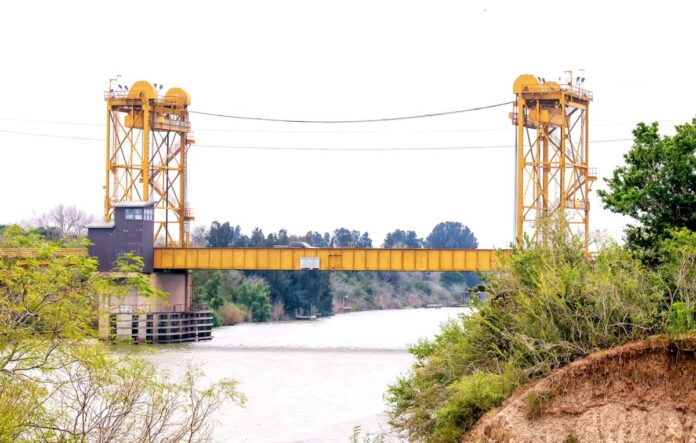 HARLINGEN — The retrofit of the Rio Hondo mechanical lift bridge is approaching the halfway point.

TxDOT engineer Sergio Sustaita, also the project engineer on the renovation of the unusual bridge, told the Harlingen-San Benito Metropolitan Planning Organization yesterday the $12.4 million project was about 42 percent complete.

The landmark yellow bridge, which opened in 1953, is one of only three such bridges in the nation. A California mechanical lift bridge is still operational, but one in Louisiana no longer raises and lowers, merely serving as a fixed crossing.

Pointing to a PowerPoint photo of the bridge, Sustaita tapped his laser on one of the giant wheels — there are four of them — which sit atop the four corners of the bridge.

“This is the machinery that’s being removed and it’s heavy machinery,” Sustaita said. “When I say heavy, these are almost 10 feet tall — all steel,” he said. “They go at the very top. … Those have to be removed and that’s where it takes us up to now.”

Sustaita stressed that because the bridge, and the work being done to retrofit it, is directly over the Arroyo Colorado waterway, special care is being taken to ensure material removed from the bridge doesn’t fall into the water.

A huge tent-like structure is draped over the end of the bridge to try to contain the old paint and rust which is coming off.

Sustaita stressed just how important paint is to a steel structure like the mechanical lift bridge.

“There are three paint levels that they are using,” he said. “Once it’s been removed, they’ll go to the next level — primer, mid-coat and your final paint.”

Work on the bridge retrofit began in September and is scheduled to be completed by the end of this year.

The bridge, which is locked in the up position to allow barge traffic up the Arroyo Colorado to the Port of Harlingen, has cut the city of Rio Hondo in half.

The official re-routing is about a five-mile transit to get from one side of Rio Hondo to the other, but many locals use a shorter route on Cemetery Road.