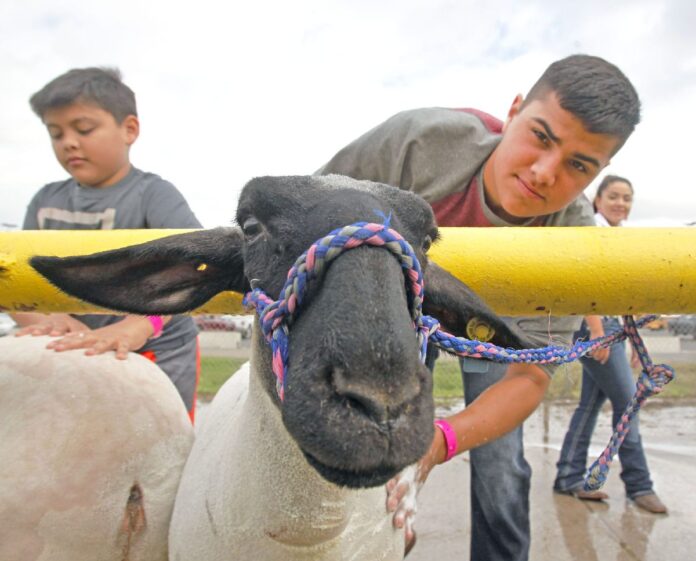 MERCEDES – Bright and early in the North Barn, exhibitors were already busy preparing for the day’s competition.

Contestants were trimming and blow-drying the coats of their animal projects in preparation for the day’s judging of market lambs and goats at the Rio Grande Livestock Show.

But for veteran market lamb exhibitors like Ty G. Rhyner, 17, and his brother Jake Rhyner, 15, both of the Arroyo 4-H Club in Rio Hondo, the routine has become second nature.

As the judging was about to begin, the first lightweight exhibitors began lining up to enter the judging ring.

Judge Jess Yeaman, of Uvalde, Texas, evaluated each entrant, taking in a 360-view of the lambs to consider their coat, size and weight, among other requirements. The lambs are first judged among their type – haired, medium wool, fine wool, fine wool cross and southdown.

Anxious families in the bleachers watched as the judge made his picks and eliminated others. During that time, the scene was tense and the feeling of nerves ran high as any mistake could knock their child out of the competition.

During the first class, Carlos Rodriguez of Sharyland Pioneer High School won first place in the haired lightweight class and Monika Mesa of Los Fresnos won second place, but both lost during the final judging to choose an overall winner.

Jake Rhyner, who won reserve grand champion, has been exhibiting since third grade but this is his first year winning.

His brother Ty Rhyner won grand champion in his second year showing lambs, but he has been active in 4-H since the third grade.

“This is my second year and I win it again.” Ty said. “I feel relieved that my hard work came through.”

He added that he feels excited about his brother winning and getting to do what he loves — participating in the livestock shows.

The market goats took the stage in the afternoon. They are judged classified by their weight: light-weight, light-medium, medium, medium-heavy, heavy-medium and heavy.

Kipp Brown, of Mississippi, judged the market goats, with the process similar to the lamb judging. Winners in each weight class then competed for the grand champion award.