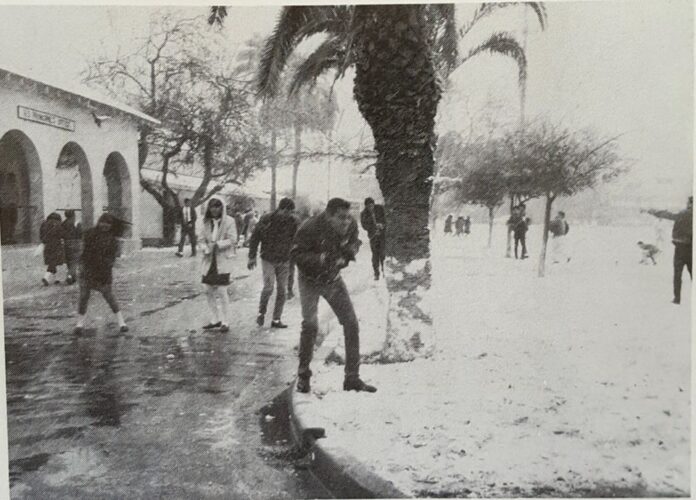 RIO GRANDE CITY — Once in a generation, an atmospheric miracle will befall the Rio Grande Valley when the temperatures drop low enough to crystallize the moisture in the air.

One of those occurrences was 50 years ago in Rio Grande City on Jan. 10, 1967, according to the National Weather Service in Brownsville.

On that day, 2.5 inches of snow fell upon Rio Grande City residents. The temperatures that day reached a high of 38 degrees Fahrenheit and a low of 32 degrees, according to the National Weather Service.

Joel Garza, a retired accountant, was an eighth-grade student at Immaculate Conception School at the time and said he remembers the event clearly.

“I remember it was cold obviously and we were at school and late morning, I think it was around lunch time, when we started seeing snowflakes,” said Garza, 63. “Being at a Catholic school, the nuns wouldn’t let us out and we just couldn’t believe it.”

But as soon as school let out, Garza said, the students rushed out and began playing in the snow. He said eventually the teachers were out there throwing snowballs at the kids.

“Our generation had never seen snow unless you’d traveled somewhere,” he said. “It was just an experience that no one will forget because it was, again, a first for us.”

McAllen did record 0.2 inches of snow on the previous day, Jan. 9, 1967, according to the National Weather Service, but other places such as Harlingen and Brownsville only recorded traces of snow.

“People from the rest of the Valley were coming over to see what snow looked like,” Garza said.

Rio Grande City has only had four recorded instances of measurable snow since 1906. On Nov. 28, 1923, the city recorded a half-inch of snow and, before that, three inches were recorded Feb. 7, 1906.

The most recent instance was the Christmas snowfall of 2004, when Rio Grande City recorded three inches of snow.

Garza said he’s seen plenty of snow since the snowfall of 1967 but he said the others weren’t the same.