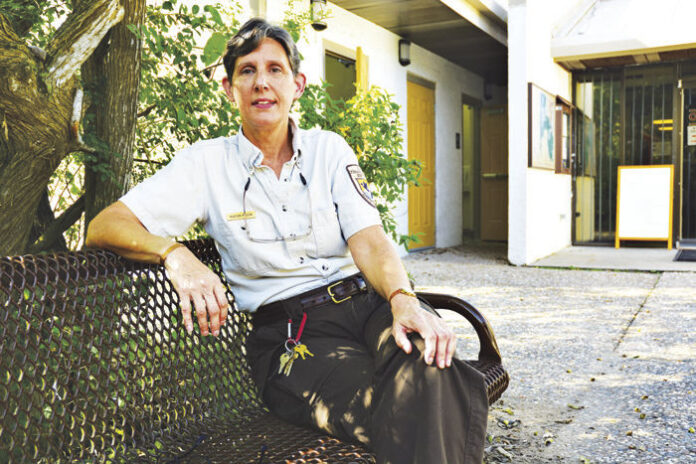 So how many follower rangers are there?

“There are none, so I guess I need to adjust my title,” Mason says with a grin. “I am the ranger. You can call me the Lone Ranger.”

Despite her allusion to riding the trails of the High Lonesome alone, Mason is a central figure in one of the most important operations at the wildlife refuge — the visitor services program.

That means she oversees infrastructure such as trails, parking areas, tour vehicles, educational programs and habitat and birding tours.

“We also go off-site to do outreach,” Mason said. “We visit schools, we go to community events and we have a lot of outreach in education as well as within the facilities on-site.”

Due to budgetary considerations, the popular visitor center at the refuge cut back from being open seven days a week to five. She says she couldn’t manage even that without the help of approximately 50 active volunteers.

The refuge consists of about 45,000 acres, and it maintains 74 miles of trails.

“I’m not personally out there maintaining them, I just have to make sure it gets done,” Mason said. “We all work together as a team, so our maintenance crew has to mow and things like that — there’s a lot here to maintain, and we have a lot available to the public.”

Mason, who has a degree in wildlife management, will mark her seventh year at Laguna Atascosa in February. In all, she’s worked for 16 years for the U.S. Fish and Wildlife Service, which oversees the nation’s refuge system.

“Originally my career goals were to be a biologist,” Mason recalled. “I started volunteering at a refuge after college and was working with their hunt program — l processed the deer — and an opportunity arose when they were opening to the public.”

Mason says it was the right place, right time, and she got the Maryland job that started her service with USFWS.

Biology degree or no, Mason said once she began working in visitor services she realized how crucial it was to the overall message of conservation which the refuge system embraces.

“Biologists do great things but they can’t do all that’s needed for conservation alone,” Mason said. “You have got to have the public involved in that.

“I kind of see myself as the link, I guess, between what the biologists are doing and what needs to be done in letting the public know about it and find ways the public can get involved,” she added.

She says it’s a message which is communicated on refuge tours.

“If you’ve ever been on our tours, you’ll see that we’re stressing — ‘Here’s what we’re doing and here’s what you could do if you want to help, too.’

“Everything from reducing pollution to buying ocelot license plates.”

Most land in Texas — 97 percent by some estimates — is in private hands. For Mason, it makes the refuges even more important since they allow people access to wild areas which otherwise might be off-limits.

“If someone’s fortunate enough to own property, they can be out in nature,” Mason said. “But more and more people aren’t able to own land, or big tracts of land … so a place like this gives everybody the opportunity to experience nature.”

Mason concedes that, even at a preserve like Laguna Atascosa, it’s not the virginal wilderness one might have found in South Texas prior to the 20th century.

“But as you drive around, you can definitely see prairies and forests and significant chunks that are representative of how it used to be,” she said.

She says she’s happiest when locals visit Laguna Atascosa, perhaps on a tour, and learn something they didn’t know about where grew up.

“Everyone looks at their own backyard and says, ‘Oh yeah, I already know everything about this,’ or ‘this isn’t that significant.’

“Yet people come from all over the country and all over the world to visit here because it is so unique in terms of the wildlife and habitats, so when the locals realize, ‘Wow, I live in a special place,’ that gives them hopefully the motivation to protect areas like this and/or maybe add some habitat in their yard or get more involved.

“That’s really the spark that is needed to make wildlife conservation work.”