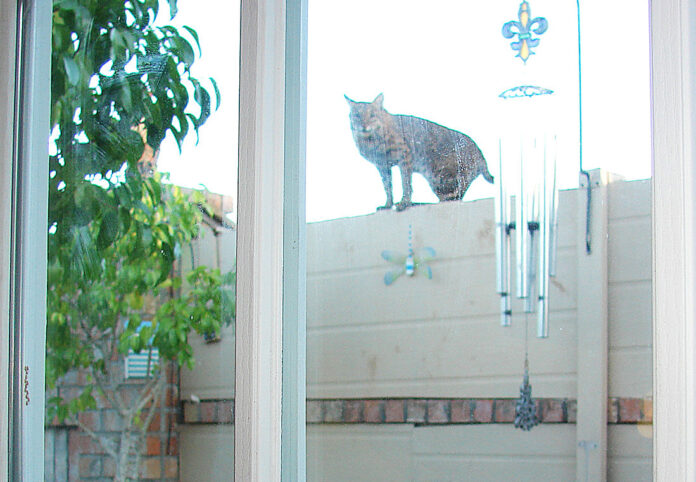 HARLINGEN — It was a relaxing Sunday morning, and Phyllis and Keith Ostrander were spending it like they always do, sipping coffee and reading the newspaper before heading to church.

And then they came face-to-face with one cool cat.

The bobcat, which the Ostranders estimated weighed about 20 pounds, walked along the top of the wall of their Cottonwood subdivision yard, just 10 to 15 feet away from the surprised couple.

“I am a native and I have never seen anything like that” said Phyllis, who is 81.

Keith was a quick thinker, though, grabbing his camera and getting a photo of the visitor, who looked like he or she was posing for it.

Phyllis, a lifelong resident of the Harlingen area, said the cat left and headed toward Ed Carey Drive. She said the surrounding neighborhood consists of woods, a farm and some new construction, and she’s convinced it could well be an area where bobcats reside.

As surprising as it might be in your back yard on a Harlingen Sunday morning, such a sighting reveals that bobcats — even in the city — aren’t all that rare, biologists say.

“If they’re living around the arroyo or that Thicket area, there are going to be cats coming through, and the same with coyotes,” said Jimmy Stout, urban biologist at Las Palomas Wildlife Management Area headquartered in Weslaco.

Yet, Stout said, there’s little reason to be overly concerned about being so close to feline nature, although it can be unnerving to discover your back yard can be like the wilds of Alaska.

“The only problems I can see for people is if they have chickens,” Stout said. “Pets should be OK. Small dogs could have a problem — it’s possible. But I don’t hear about that very often, so it’s not something to be terribly concerned about.”

It’s smaller prey, like rodents, rabbits and bugs that bobcats are after, Stout said.

And even though the Rio Grand Valley continues to urbanize, there’s still room for the wild things. The Rio Grande and the Arroyo Colorado are lifelines for animal movement.

“South Texas used to be solid brush,” Stout said. “The Valley doesn’t have a whole lot of that habitat left, but the habitat we do have is pretty active.”

Stout did note that the reason we still see bobcats within the city of Harlingen is that they’re adaptable when it comes to coping with people.

“Bobcats are a ‘generalist’ species, compared to a ‘specialist’ species like an ocelot,” Stout says, meaning that bobcats adapt better to a wider range of environments than their ocelot cousins.

The bobcat is a medium-sized, reddish brown cat about the size of a chow dog.

Length of the adult is about 3 feet, 6 inches.

Bobcats are highly adaptable felines and throughout most of their range in Texas have shown a marked ability to cope with the inroads of human settlement.

The bobcat’s food consists mainly of small mammals and birds. Among the mammals found in bobcat stomachs, wood rats, ground squirrels, mice and rabbits supply the bulk of the diet.

Occasionally deer are killed and eaten, but most of the deer meat found in bobcat stomachs has been carrion.

The bobcat also preys upon domestic sheep, goats and poultry. The predatory damage is not great, except in rare instances.

The bobcat is the only native Texas cat which is important as a fur animal.