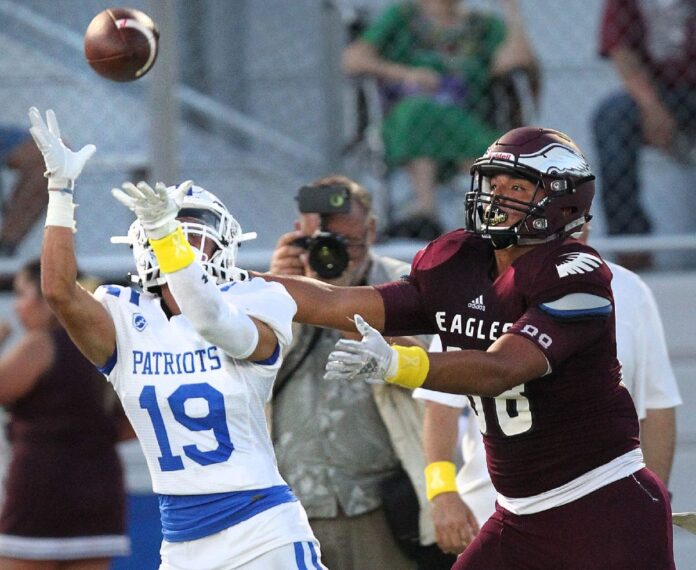 MISSION — The Battle of Conway was nearly pulled over for a speeding ticket after four plays. Almost immediately after the rivalry game kicked off, two drives resulted in two touchdowns.

The Mission High Eagles scored via two long plays, then the Mission Veterans Patriots hit a home-run pass for 74 yards. The packed house wearing both colors Friday at Tom Landry Stadium was sent into a frenzy. Eagles junior running back Horacio “Tito” Moronta V was the first player celebrating in the end zone. Not long after, Mikey Garcia was taking a 74-yard TD pass from Landry Gilpin to the house.

The action kept the fans on the edge of their seats, even though the scoring didn’t maintain that breakneck pace. Mission High ended up on top 24-12, snapping Veterans’ four-game streak in the series.

“It’s a good momentum builder to bounce on a team, jump on them and score early, especially within two plays,” Moronta said. “It boosted our confidence during this game. It feels good to finally break the streak. Feels good to get the helmet back to Mission High and get a win over these guys.”

Momentum came in many forms during the evening. The early scores left both teams feeling like they could score at will, but that trend didn’t last long. Rene Rodriguez’s field goal for the Eagles marked the only other points of the half.

Moronta was a force all game, rushing for more than 150 yards and putting home the early score. Returning quarterback Damian Gomez tipped his hat toward the ultra-effective Eagles offensive line.

“Without the O-line, we’re nothing,” Gomez said. “Those guys work hard day in, day out. We appreciate them. They’re the heart and soul of this team.”

The upset win for Mission over the RGVSports preseason No. 3 team can’t be analyzed without mentioning the pressure put on Mission Vets quarterback Landry Gilpin. Eagles defensive lineman Ramon Montes came up with a huge play in the third quarter when he intercepted Gilpin on a short pass intended to be thrown away.

“It’s hard, because they have a really fast quarterback,” Montes said. “We just found the weakness they have, and that was their line. We ended up having a great game, and we finished the streak.”

“It was the best football play I had in my whole football career, which is only like 12 years, right?” he joked. “It made me so excited. I was the king of the world. I was thinking of taking that one home, but I fell down.”

Mission Veterans may look back on Friday and wonder what could have been. On the second drive of the second quarter, Gilpin missed Garcia on a pass that would have been just as wide open as their first score of the game.

The Patriots defense forced turnovers and created a field-position advantage, but the offense didn’t cash in on those chances.

The reigning Monitor All-Area Player of the Year, Gilpin had a strong individual effort as he frequently escaped the pocket and made plays with his legs. He scored a rushing touchdown to put Veterans up 12-10 late in the third quarter.

He finished with only 77 rushing yards as multiple sacks bogged down his numbers.

He was outdueled by Eagles junior Damian Gomez, who had only 60 yards rushing but punched in two QB-keeper TDs, even scoring one after a short injury break.

“Nothing was going to keep me out of this game,” Gomez said. “The intensity, the trash talking this game. I wouldn’t trade it for anything, and I’m not missing a snap.”

The former Eagles quarterback and third-year coach Koy Detmer knew his team would have to give everything to earn his first win in the rivalry from a coaching perspective.

“The whole community gets into it, gets behind it,” Detmer said. “It’s always a battle. The kids know each other from elementary on up. It’s always one of those games. It takes offense, defense and special teams to win this one.”