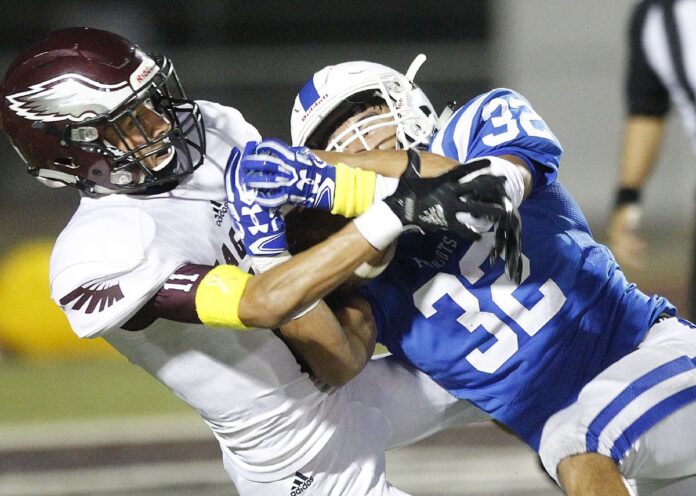 The annual showdown between Mission High and Mission Veterans is back where it belongs this year, under the lights at new-look Tom Landry Stadium with kickoff set for 7:30 p.m. Friday.

The bleachers are new, the press box is spiffy, and the crowd atmosphere should be electric in a stadium named for the most famous football personality to come out of the region. On the field, the game promises to be heated.

With Tom Landry Stadium closed for renovations at the time of last year’s matchup, the Patriots narrowly edged the Eagles 16-14 in a rather sluggish battle in Donna. This season, fans can probably expect more offense, as both teams return a lot of key impact players with visions of rivalry-game glory.

Landry Gilpin is undoubtedly the player to watch for Veterans. The quarterback was The Monitor’s All-Area Player of the Year as a junior, while receiver Mikey Garcia earned Newcomer of the Year honors last season as a sophomore.

Mission High enters 2018 with a stronger core on offense and defense, as well. The Eagles held a quarterback battle during the summer, and all signs point toward incoming freshman Jeremy Duran taking the helm. If not, returning junior Damian Gomez is capable of slinging the ball to Mission’s receiving core.

Neither team should have trouble creating offense. The question for both will be on the defensive side of the ball. Whoever is quicker in pursuit or can make key stops to stifle drives will walk away Battle of Conway victors, with bragging rights until they do it all over again in 2019.