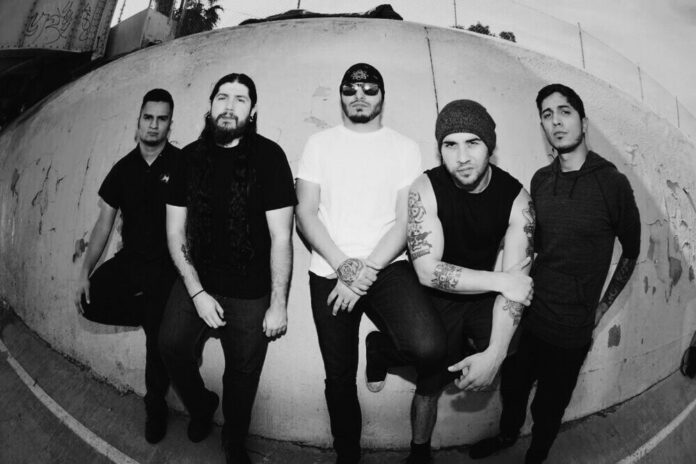 Since forming in 2013, McAllen-based rock band Sons of Texas have released a pair of records — “Baptized in the Rio Grande and “Forged By Fortitude” — and toured around the world.

Festiva talked to drummer Michael Villarreal about how being on time is the most important thing for an opening band, how drinking on the road gets old and what was so cool about Japan.

Tell me about the part of the job of touring that people don’t see typically.

Michael Villarreal: We don’t travel with a road crew. We travel with a tour manager and a merch guy. That’s it. It’s our only crew member. For us, we wake up from the hotel, depending how long the drive is … we try to find the fastest routing to the venue. Usually the headliner will have a pretty early load in at noon. So we usually have to be there at 2 or 3 o’clock. We just have to make sure we’re at the venue at whatever time the headliner needs you there. We’re pretty much on their time.

That is the most important thing about being on a tour package and being on the road: being punctual. It doesn’t irritate a headliner more than being late. The worst part is going over your set time.

We load in at about 3 o’clock … you kind of wait around (and) look for food or just have time to look around the city. We make sure we’re at the venue before doors open to just hang out at the show and make sure we’re mentally prepared for the set.

Play the set, breakdown our stuff and load up as fast as we possibly can because once we finish, all of us go to the merch table in case anyone that caught the set wants to come and meet us. We just feel like that’s a good way to connect with the people that like us and came out to see us. It’s the least we can do.

We stick around until the headliner is done — until the show is over. If the next show is more than I think seven hours, then we’ll drive overnight. We won’t get a room. That would mean we’d get in at 1 a.m. and we’d have to wake up at 5 a.m. to make the drive. It’s not even worth it so we’re just deadhead straight overnight, get to the next show and do it all over again.

You guys got the chance to tour in Japan. What was the best part of that and what have you gained on the road?

It’s insane to see how efficient the people work. We played a festival over there and they had a crew — I counted like 10 people — that as soon as we got done playing, they just came on stage and they each grabbed something from the drums. They got everything off the stage in less than five minutes and had the new band up there.

(Touring has) made me appreciate all walks of life. It’s good to see that there are good people everywhere — all over the world.

Especially around the states — I’ll be honest — I was kind of worried. We’re a band of five Mexican dudes, you know? We hit the Bible Belt and there are people coming to our shows with like Confederate flag shirts and stuff. I don’t know if we’re going to get (expletive) from these guys because we’re Mexican. But everybody is respectful. We’ve never come across any kind of racism or anything like that. It is different with the music scene. Everyone’s a little more united and they’re there for the music. They don’t care what ethnicity you are or what religion. It’s a cliché as it sounds. They’re all there to listen to the music.

What are some mistakes in touring that you made early on that you know not to make now?

MV: One time we did get in trouble — I wouldn’t say what band it was but it was a big band. We were playing a bigger arena show. When a support band finishes playing and they get their stuff off the stage, it is the proper etiquette to pack up your (expletive) as fast as you can and load it up in your trailer. Well, we didn’t know that.

Now we pride ourselves on that as soon as we’re off stage, we’re loaded up in 15 minutes.

Also, the big thing is the drinking. It gets old fast. Waking up with a hangover on the road is not fun. We have to wake up early and we have these long drives. We’re sitting in the van and it’s not a good experience. We’ve learned our lesson, so unless we have a day off, (then you can) knock back a couple if you want to. If it’s a show day, we’re out there working. We don’t want to sacrificed anything from the show.

What have you learned to improve your mental health on the road?

MV: Right before we play, sometimes I have a few shots just to get loose because my anxiety will be skyrocketed. But, it’s mainly finding the balance. One, not drinking too much, that’s the main thing. Eating well: you don’t want to eat junk food on the road. It affects you physically. When you’re on stage, you don’t want to feel sluggish. We try to eat small meals. We don’t eat several hours before we play.

As far as staying sane, it’s finding the time to keep in touch with family back home. It’s important to make time. Unless it’s a day off, we’re so busy every single day that we could just text. But it’s very important to call your loved ones and … hear their voices.

It helps a lot, especially if you get overwhelmed on the road. We did a couple of tours back to back. I felt a little homesick, and just being able to talk to our family back at home, it helps a lot.

What are your goals as a musician and as a band?

MV: Looking forward, one goal would be staying on the road and hitting cities we haven’t hit before. That’s huge. You want to have the market broadened.

I always say that we’d like to tour with bands we haven’t toured with before, see cities we haven’t seen before and just to reach as many ears as we can.

As far as the music goes, just pushing ourselves. We pride ourselves on being very capable at our instruments. We’ve been playing for 20-plus years at our own instruments. We know what we want to hear now.

This is going to be the third album coming up. We feel like we know more about how to go about making a nice little blend … like a playlist for an album … instead of just having the same heavy song for 10 tracks and it gets redundant. Because honestly, nobody buys albums anymore. People buy singles, so you want to have diversity to where if they do buy your album.

How has the songwriting process changed over time?

MV: It got a little difficult because of how heavily we were touring. We would come home from tours, and we’d spend time with the family. We’d get together once every two weeks if we were home. It made it a lot more difficult.

We would send each other recordings of guitar riffs or vocal melodies. But, that’s one thing we had to adjust to. We still need to get together. We need to constantly be writing because we don’t know how much time we have before we’re in the studio. We need to be prepared.

We’ve been playing together for so long, writing comes very easily to the five of us. I have my brother in the band. He plays the bass. Him and I get to write the grooves and it’s just comes so naturally for us to do the rhythm session. The more you do it, the easier it is.

How long have you and your brother (Nick) been making music together?

MV: We started playing in a local band in 2005. (He was 14.) It was our first show. We played at the VFW off (Business) 83. We were in the underground death metal scene/hardcore scene. Man, we lived on it.

In high school, kids would go to parties. My partying days were playing three shows on the weekend. That was my upbringing. I was obsessed with playing as much as I possibly could because it’s fun. I’d already known how to play drums. I’ve played for five or six years before that.

It was cool to get together with friends … and see people go crazy.

WHEN Doors open at 2 p.m. Sunday

COST All tickets are $20 at ticketmaster.com; no assigned seating