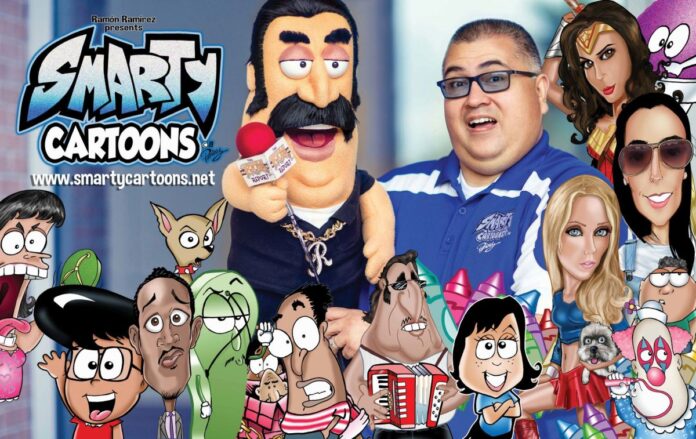 EDINBURG — Memories are what’s left to cherish as Ramón Ramirez Jr. pushes forward with his artistry.

Ramirez’s mother, Esperanza, died last November. He has a framed photograph of her near his workspace and recalls her being one of his biggest fans and followers since his childhood days.

As he struggles to focus after the painful loss, the 48-year-old Edinburg native feels gracious about his mother supporting him through the years.

His artistry includes being a head fine arts coordinator at Edinburg High School by day and a cartoonist by nights (and weekends).

He is also the baby of the family with older sisters.

The introduction into the art scene began with the assistance of his sister Eunice, who took him to the local library, and that’s where he discovered books and the imagination launched.

When he was an adolescent, the family moved to East Texas, where his father, Ramón Sr. was a pastor and was transferred to a local house of worship and attended elementary school as well. The family moved once again during his pre-teen years to Illinois and attended middle and high school, but despite all those transitions of being located in the unknown, focusing on art became a sense of comfort.

“I think that helped because a lot of friends in El Paso were the travieso (naughty) kids and I think I would’ve been influenced by that and my life would’ve taken a different path,” Ramirez said about his focus in art. “By moving to Illinois, I didn’t know anybody and I was very new and art was my safety pillow and I embraced it.”

“Art was my security blanket that I used a lot because I was alone in the sense of not many friends and then shy,” he said. “Art was my way to secure me and get out of trouble and not getting sad, but more like finding a way to nurture my time in adjusting and growing up, and even through college that became an element of humor and wanting to be humorous.”

Ramirez returned to Edinburg the summer before his senior year to gain residency after being in another state for several years, graduating from Edinburg High School in 1987.

During his tenure at Del Mar College, Smarty Cartoons was also initiated in 1987 — that’s where he got his big break.

“My friend suggested why don’t you take it to the school newspaper and maybe they’ll publish it,” he said. “I was like no way because I was too shy, then I said you know what, I’ll do it. So I went into the room and said, ‘Excuse me, I would like to publish my comic strip.’”

The college newspaper eventually picked up his comics strips and at the same time, Ramirez gained his confidence.

In 1991, Ramirez graduated from Corpus Christi State University with a degree in art and the following year became a teacher. As he was about to begin his first year of teaching, his father died.

The Edinburg native said his parents were very supportive in his career.

“My father was always the mature person in telling me you need a career, that’s solid and always emphasized teaching, and I would say no because I grew with my sisters being teachers,” he said. “At the time that I finished school and needed a job, I was mature enough to say I’ll do it because I need a job.”

“I’m glad I listened to my parents because that was a solid foundation to stand on,” he added. “They were proud of my work, but in the long run, they wanted to see me be established and definitely emphasized finishing school.”

In 2001, he began collaborating with The Monitor and was told to be the eyes and ears of the Valley.

“I did it so well that people were getting upset because I was talking about the other side that people had not talked about of the issues,” he said. “The reporters would interview politicians, but I bought in more satirical elements and exaggerated elements, and people were upset because they were seeing their politicians with big noses and big heads and just made it more fun.”

“As the editorial cartoonist, it made me a much stronger artist and much more mature artist,” he said. “It made me more of a solid artist and I stand by my work.”

Ramirez has also received advice from other cartoonists, such as Mike Ramirez, the national syndicated cartoonist, and told him, “Don’t ever use it as a personal tool always; use it as an editorial standpoint.”

“I’ll be honest, there are times where I say should I continue to do this, but then I get a call whether from a newspaper or TV and figure someone is still interested,” he said. “What jumpstarted my cartooning to the next level was when I started doing puppets, and that has been the most fun assignments.”

His first puppet was Rosendo, copied from his father’s looks, and focuses on Latino humor by conducting him as the main character for “The Raza Report.”

Ramirez also does Teacher Toons, a whole other category that he began in 1999 and wrapped up in 2016 with the book with a mascot named Miss Carrie Oki, which is copied after his first-grade teacher and uses to describe the behind-the-scenes of teacher interactions at a school.

“I never thought I’d be a puppeteer, but in doing animation, I was like this is hard and takes too long, and I thought what if I film something. I would film my dad’s church events,” he said.

As an artist and a cartoonist, he carries his craft through the classroom, after-school and on weekends during the summers, because he says that’s what he loves.

“The formula is very simple, you take stress and add a little bit of sarcasm to the drawing and voila, everyone can relate to it.”

He has also been a role-model to the youth, in the subject that he has inspired children because they’re fascinated by his work and want to become an artist and want to know how to get started in the field.

He also adds his knowledge and artist skills in the classroom.

“I tell my students, don’t block your experience in being an artist; you’re going to need it whether it’s decorating your house, cake, wedding or clothes, business, business card or measuring something in your house,” he added.

He has also worked with some celebrities like comedian and television actor Marlon Wayans, creating a show logo animation. What’s more, Ramirez has transformed actors into caricatures like Laura Vandervoort, Katrina Law, and Helen Slater.

As Ramirez enters his 31st year as a cartoonist, he wants his audience to know laughter is key.

“When you reach that level, you open up a good gateway to communicate, and it’s good to laugh,” he said.

Ramirez also sends a message to the up-and-comers who want to aspire to be like him.

“Have a strong educational foundation,” he said. “If you want to stay local, get familiar with places you want to work whether printing or something in business, and build from there.”