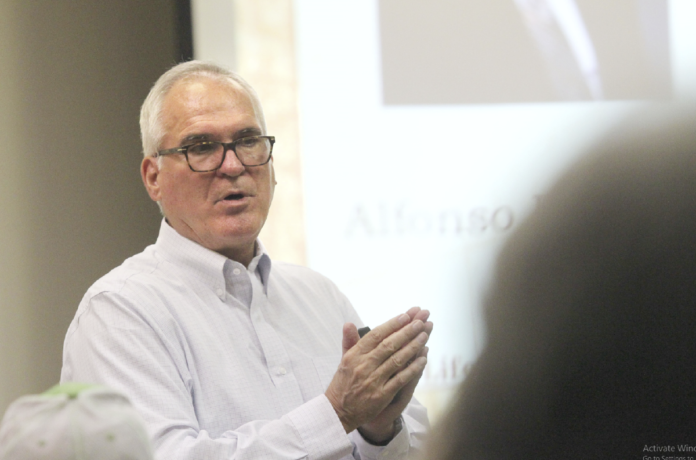 EDINBURG — As a long-time educator, Emilia Schunior Ramírez was asked in 1954 by Frank Dugan and Dr. Ohland Morton to contribute a chapter for a book on the history of Hidalgo County. The project, however, was never completed.

More than a decade later, in 1971, her son Alfonso Ramírez decided to take up the unfinished project and publish her contribution. He released the final product, entitled “Ranch Life in Hidalgo County after 1850.”

Now, more than 40 years after the first publishing, Robert Ramírez, Emilia’s grandson and Alfonso’s son decided to re-release the book for today’s generations.

“It was a primary research document for a lot of writers and historians and it is popular; the museum has been selling it for 40 years,” Ramírez said. “I just decided to update it and for it to continue to be available.”

Sunday he gave a presentation about the book at the Museum of South Texas History during the monthly Speaker Series.

At 68 and a third-generation educator, he spoke about his father, Alfonso. He then delved into important topics from the manuscript, such as their life at home, favorite dishes they would cook including veal, quail, duck, geese, goat, pork and beef, including the veggies – green beans, squash, carrots and green corn, the celebration of holidays and festivities, such as Jan. 6, known as Epiphany.

He tied family history through photographs of past generations and the connection of families like the Schuniors and Velas of Edinburg, among others.

Since the book was republished in 2014, Ramírez notes a paragraph from his father that reads, “It was my mother’s wish that we would not forget this part of our heritage and that an authentic record be preserved for other generations. I hope that this modest booklet keeps her dream alive.”

Schunior Ramírez was a teacher, school administrator and historian.

Born in 1902 in Sam Fordyce, Texas, the family moved from Mission to Edinburg when the Mission schools began to segregate Mexican-American children. She was a 1919 graduate of Edinburg High School, attended several universities throughout Texas and eventually received a Bachelor’s degree from the College of Arts and Industries in Kingsville.

She then taught throughout the Rio Grande Valley including Roma, Rio Grande City, Edinburg and La Joya from the mid 1930s to the early 1950s. During many of those summers she attended the University of Texas at Austin, where she obtained a master’s degree in education.

During her last decade of life, she became a college professor at Pan American College. Months before her death, she took a leave of absence from Pan American and traveled to Mexico, becoming ill with pancreatic cancer. She died at 58 years old in 1960.

“It takes people of a certain age to be interested in our history. I lived a good part of my dad’s life completely unaware and just focused on baseball and only later found out that there were things that were accomplished during his lifetime,” the 68-year-old said.

“We’re so grateful the museum is here because we want to tell kids to talk to their parents, grandparents and great-grandparents and get something about their life story because once they go, the history is gone and there’s no way to recollect it.”

The Al Ramirez collection that was donated to the museum by the Ramírez family was also on hand for the audience to see. For more information, or to view the Ramírez collection or purchase a book, visit the Museum of South Texas History located at 200 N. Closner Blvd. in Edinburg.