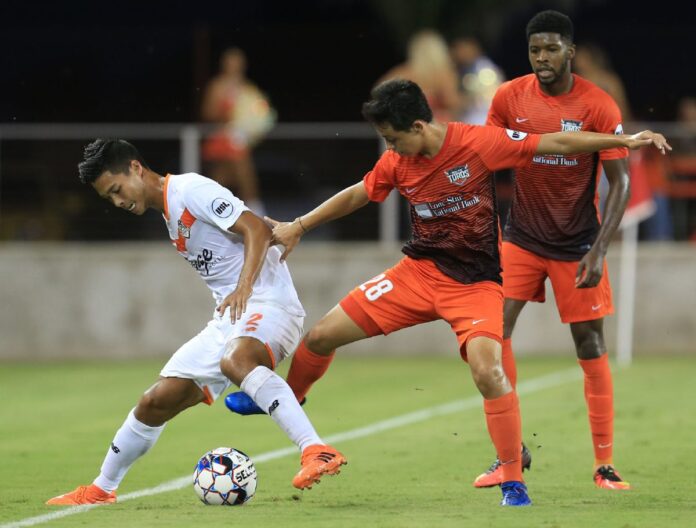 EDINBURG — Given the often overlapping schedules of the Houston Dynamo and RGV FC Toros, Dynamo coach Wilmer Cabrera rarely gets to watch his son Wilmer Cabrera Jr. suit up for RGV.

The younger Cabrera has become a mainstay in the Toros’ lineup in recent weeks, and RGV’s unusual match time at 4 p.m. Sunday against Swope Park gave the elder Cabrera the chance to take in his son’s third start and fifth appearance with the Toros.

Cabrera Sr. said his son played a “very active” game, making plenty of strong touches in the 0-0 draw. Cabrera Jr. stands 5-foot-8 and 141 pounds and won’t celebrate his 18th birthday until Sunday, but his father said the forward shielded the ball and used his savvy to maintain possession.

When they spoke on the phone after the game, coaching was far from the older Cabrera’s top priority.

“I just try to be his dad, you know?” the elder Cabrera said. “I know it sounds difficult, but I just want to be his dad. After the game, I don’t want to put pressure on him. I think it’s enough pressure that he feels being my son.”

Having your father as the coach of the Toros’ MLS affiliate Houston Dynamo can bring additional eyes and expectations, both for Wilmer Jr. and his brother David Cabrera, a 23-year-old midfielder for RGV FC who is yet to see action this season.

Wilmer Sr. said his sons are still learning how to manage that pressure, but both younger Cabreras said their father has been more of a benefit than a hindrance during their time with RGV FC, which hosts Colorado Springs Switchbacks FC at 7:30 p.m. Saturday at H-E-B Park in Edinburg.

“It more helps me,” Wilmer Jr. said. “A little pressure is good. It’s not too much. He’s not overly aggressive on it. But he helps me. At the end of the day, he doesn’t force anything on me. It’s all me.”

Wilmer Jr. first sat on the bench for the Toros during his summer break from IMG Academy in 2016, when Wilmer Sr. was the RGV FC coach. After graduating from IMG earlier this year, Wilmer Jr. began training with the Toros this summer. He’s also previously spent time in preseason training with the Houston Dynamo first team and played for the Dynamo Academy in the Generation adidas Cup.

Certainly having his father coach the Dynamo helped Wilmer Jr. get his foot in the door with RGV, but that was the extent of Wilmer Sr.’s influence.

“If he’s playing, it’s because the coach wants him there,” Wilmer Sr. said. “Not because I want him there. I cannot do anything, and I wouldn’t do anything, because I’m a coach, too. No one tells me, ‘Hey, put my son.’ It’s not going to happen. So I’m the same way.”

RGV FC coach Gerson Echeverry said Wilmer Jr. earned his spot on the field during training by scoring goals and combining well in the final third — two aspects of the game the Toros have struggled with this season.

When Echeverry discusses RGV’s players with Wilmer Sr. and the Dynamo technical staff, Wilmer Jr. is regarded the same as anyone else on the roster, he said.

“We try to be careful with that, because we know there could be a perception and people outside of the club might think there’s special treatment or we’re going to say more,” Echeverry said. “It’s not. Everything is earned.”

“When he messes up, he gets yelled at, just like anybody else. When he doesn’t do things, he gets called out.”

Both David and Wilmer Jr. said they’ve never noticed any of their Toros teammates wondering whether the Cabreras receive preferential treatment.

Echeverry and Wilmer Sr. said the proof is David, who has trained with the Toros the past two summers and all of this season following four years at Division II South Dakota School of Mines and Technology. He made the team as part of a tryout that the elder Cabrera had no involvement in, and he has yet to see the field.

“I have the same love and the same desire for my two kids to play, but I cannot do anything,” Wilmer Sr. said. “They have to earn minutes by themselves.”

Wilmer Jr. said David has played a valuable role in his transition to RGV FC, integrating him with the friend group David had already built.

David and Wilmer Jr. live together off the pitch, and David said he’s made an effort to help Wilmer Jr.’s jump to the professional environment at every possible opportunity.

“It’s a dream come true to be able to play with him,” David said. “Ever since I was younger, I always wanted to make it to the pro level and be by his side. Hopefully, we’ll be able to get some minutes together on the pitch sometime.”

Though the two younger Cabreras have accomplished their goal of playing together, both are still looking for their first opportunity to play for their father, who has never coached them at any level.

Wilmer Jr. called it a dream to play for his father, even though he admits it would be “weird.” David said he knows Wilmer Sr. would be harder on either of his sons compared to his other players.

Wilmer Sr. said the pressure on either Wilmer Jr. or David playing for him would be double the rest of the roster, but he’s not often thinking about the future or the possibility of coaching his sons in the MLS. Instead, the focus is on their development as players.

Wilmer Jr. is still weighing his options going forward. Because he is not paid by RGV FC, he still has the opportunity to go to college — a journey he said he would likely start next fall. He said he dreams of reaching the MLS one day, but the more immediate focus is finishing out the season with RGV FC.

“He felt confident that he could make the team, and not only has he done it, but also he’s been starting for the team at 17 years old,” Wilmer Sr. said. “I think it’s very positive for him. He’s gaining a lot of confidence, and the coaches, the staff, I think they trust him, and that’s why he’s actively playing lately. So it’s very positive, and I’m really, really proud of him.”