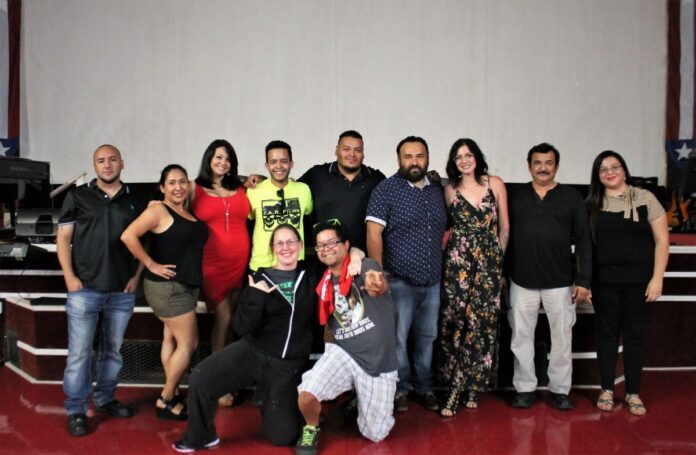 MISSION — Demons and serial killers were some of the main characters displayed in the short horror films shown Saturday at Border Theater.

Edinburg native Jose “Joey” Olmeda, founder and event organizer, said the screening is to showcase films and give exposure and recognition to local filmmakers.

The collaboration began during the spring when Olmeda posted on social media asking filmmakers to submit videos to his page because he wanted to have an outlet for independent directors in the Rio Grande Valley to showcase their films.

The news quickly spread to local directors like Joe Rios and Abel Gonzalez and they submitted a film. During the submission period, Olmeda also received an unexpected surprise phone call from PSJA Teacher, Frank Zepeda who said that his daughter Manelly wanted to participate.

Manelly, a San Juan native, recently starred with Mexican actors, Eugenio Derbez and Salma Hayek Pinault in the 2017 film, “How to be a Latin Lover.” She showcased two films; “La Lechuza” and “Somos Sus Amos.”

“Toe Tagged: A Short Horror Film Festival” was a collaborative effort of short horror films made by independent filmmakers from the Rio Grande Valley in conjunction with others from across the state and shown to an audience of about 30.

Olmeda, who has his own production company called “J.A.R.” films, which he began in 2014, showed three films.

“Since I was a kid, I liked watching movies; I guess I was a film fanatic. My brother and I would make movies and capture it through VHS; it became my passion and interest.” Olmeda said. “During my freshman year in high school, we began putting more effort and learned editing and practiced through trial and error.”

Olmeda added that his inspiration into filmmaking and making horror films came after watching “The Texas Chainsaw Massacre.”

“I took something old and kind of revamped it including the stalker and with the twist of comedy,” Rogers said. “I read this article about this person that was stalking people and its fetish was looking through windows and so I thought I would follow that and kind of change it to Halloween theme.”

Stephanie Baggett, one of the stars of the short film, said it wounded up being really funny for a comedy. Baggett, who has done other short films, said it was through a mutual friend that got her in contact with Rogers and when they met, she felt comfortable after reading the script and decided to play the character.

The film was shot in five hours and filmed in his aunt’s home, Rogers said.

“I just want to shine a light in the Rio Grande Valley and make it important,” Olmeda said. “I wanted to make it like the way it is in Austin and I don’t plan to give up.”