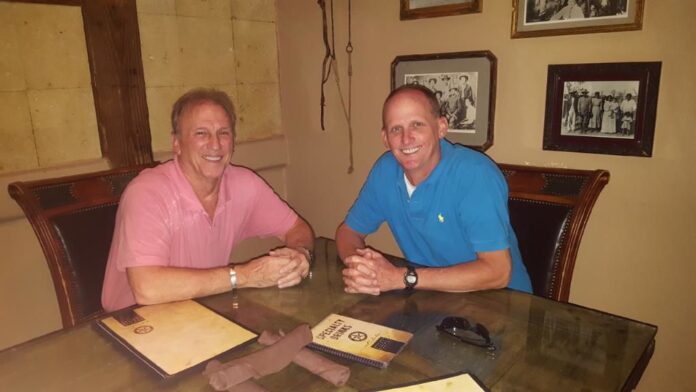 Chaney described a void of uncertainty which motivated him to find his son, who would be 50.

Was he alive, or what was he like, he’d wonder.

He submitted his DNA to sites like Ancestry.com in an attempt to find a match.

No luck — that was until last October when 50-year-old McAllen resident Jason Gabbert sent in his DNA.

“‘It looks like we’re related,’ and that’s all it said,” Chaney recalled, remembering the email his biological son sent. “When I looked at the website … gave the options of parent or child, well I knew he wasn’t (my) parent.

“When that came, it was a joyous moment.”

His adopted parents, Gerald and his late mother Gwen, were always encouraging of learning about his past, and Gabbert said he was partly motivated to search to discover his family medical history.

“It’s been such a life-changing event for me,” Gabbert said. “My adopted father is still alive and I see him every day, and that’s all I knew. It’s just such a bizarre feeling to look at someone that looks like me, that acts similar to me — that I’m blood related to someone.”

He described his upbringing — living in McAllen since 1974 — as a “fantastic family life (affording him) all the opportunities in the world,” he said.

Their connection came six days before Chaney was coincidently scheduled to work in the area in as Gabbert. They spent time in Florida together in May. Both are triathlons athletes, and their lean builds — and mannerisms — resemble each other, by all accounts.

Chaney praised Jason’s adopted parents, who raised him from when he was a couple of days old.

“I met his father, and I told Gerald I can’t thank him enough,” said Chaney about his son’s dad. “He’s raised a wonderful man. The more I get to know him, he more wonderful that I know that he is.”

His goal is to be as good a friend as possible to Jason, Chaney said.

“To see how Jason turned out — to see that if I had a son, I couldn’t have asked for him to be any different than Jason. To see what Gerald and (Gwen) did … I’m blessed more to know that he was raised well and had a good life and is a good person.”