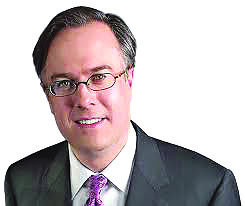 On the evidence of Rep. Kevin McCarthy’s CNN interview over the weekend, the likely next speaker of the House is a mindless sycophant and a threat to the constitutional order.

Confronted with a simple ethical question — would he condemn demonstrable White House lies in covering up Donald Trump’s role in drafting his son’s account of the infamous Trump Tower Russia meeting — McCarthy was initially dumbstruck, then shifted into a prerecorded attack on special counsel Robert Mueller. It would have been easy enough to say: “The president and his team are hurting themselves with unnecessary falsehoods. Their overall case, however, is strong.”

But such is the atmosphere of intimidation in the Republican Party that affirming the Ninth Commandment is seen as an act of disloyalty. When the king is a liar, truth becomes treason.

For all his faults, Speaker Paul Ryan was occasionally capable of showing some ethical outrage.

(After Trump attacked U.S. District Judge Gonzalo P. Curiel as biased due to his ethnicity, Ryan called it “the textbook definition of a racist comment.”) McCarthy seems to be more of a memory-foam Republican — taking the exact shape of presidential pressure. Ryan was clearly uncomfortable when ignoring his principles. McCarthy seems to view surrender to the president as a matter of principle — as part of the tribal code of the partisan. His is the loyalty of the lap dog, the devotion of the dupe.

According to Trump and his lawyers, the president’s role as chief law enforcement officer gives him “absolute” power to fire investigators, terminate investigations and pardon himself at any time, for any reason.

This means that the obstruction of justice by the president is a practical impossibility, because his actions are the definition of justice.

Since, in this view, any violation of federal law by the president (including, according to his lawyer Rudy Giuliani, the shooting of James Comey) could be immediately self-pardoned — and any resulting investigation ended on his order — the only relevant legal check during his time in office is impeachment. And since the Constitution makes impeachment so difficult — requiring a supermajority in the Senate for conviction and removal — any president who retains the loyalty of his party has essentially no practical limits on his power in criminal matters.

This brings us to the second, less obvious reason that McCarthy’s sycophancy is alarming: because of the strength of the economy. A 3.8 percent unemployment rate — the lowest in 18 years — is good for the country.

It also creates an atmosphere in which a leader might grab powers with less dissent. This is precisely what happened in Turkey, where Recep Tayyip Erdogan’s oppressive populism was enabled by strong economic growth. The same might be argued about Venezuela, where Hugo Chavez initially used his nation’s oil wealth to ease the wayto authoritarianism.

American institutions are stronger than those of Turkey or Venezuela. But one reason they are stronger is a balance of institutional power in which the legislature is willing to check the excessive ambitions of the executive branch.

Would McCarthy be willing to play that role as speaker? Consider the scenario in which Republicans narrowly maintain control of the House in the midterm elections — which Trump would claim as complete vindication for his approach to governing. Suppose the economy is roaring along, providing a partisan talking point to every elected Republican. In this environment, will the FBI survive as an independent institution?

Will all the corruption of Trump’s campaign team, his White House appointments, his family and his own past business and political dealings be washed away in a flood of self-interested pardons?

Will Trump be able to harass and intimidate his enemies in politics, business and the media with impunity?

President Trump has now claimed the entire executive branch as his private fiefdom, and every federal law enforcement official as his personal servant.

There is no reason to think it.

Daniel Webster described a member of Congress as “a sentinel on the watchtower of liberty.” McCarthy has been a leader in Trump’s troop of enablers. America urgently requires leaders made of sterner stuff.

Michael Gerson is a columnist for the Washington Post Writers Group. He is cohosting a new, limited-run PBS interview program “In Principle” that runs Fridays at 7:30 p.m. CST. His email address is [email protected].