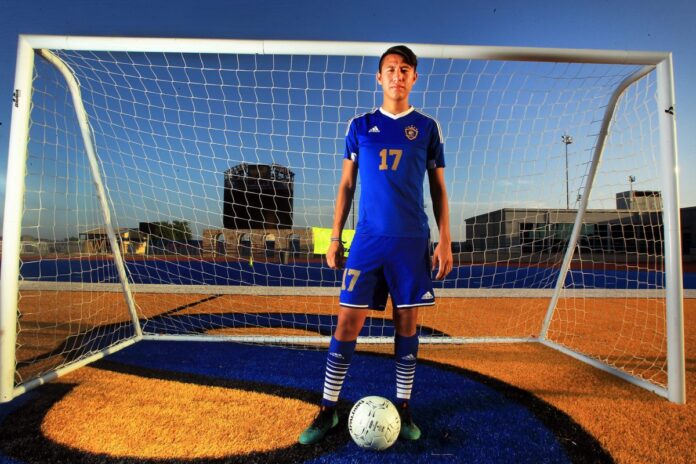 Valley View striker Mario De Los Santos has a nose for the net, a connection with the corners and a tendency for the twine.

His skillful footwork, laser accurate shot and ability to create and utilize space helped him become the Valley’s top goal scorer and The Monitor’s All-Area Player of the Year.

Near the net or closer to the midfield line, De Los Santos was a threat to take a quick windup and challenge a goalie from any distance.

On the road in a second-round district game, he received a pass just after the whistle to begin the second half. His shot was a perfect rainbow over the keeper’s head to give the Tigers a tally just moments into the frame.

His dedication to training and being on the field almost has no limits. His last class of the day before soccer practice was study hall, and his coaches had to make sure he actually finished all of his work. Usually, he was stretching and asking for a ball even before the bell.

“Since the beginning of the year, I worked really hard,” De Los Santos said through an interpreter. “We knew what the goal was. Sadly, we were just one game away.  My teammates helped me out a lot to open the spaces, get those chances in. Some of my goals were individually, but my teammates helped me a lot. Finding the right pass or space, and I helped to finish the play.”

The spectacular became routine for the junior. At times, even multiple-goal performances felt like a walk in the park. He had seven regular-season hat tricks and 59 goals before the playoffs started.

“My teammates and I worked really well throughout the whole season,” De Los Santos said. “We knew the system, what the coach wanted from us. We would help each other out during the games.”

“Mario works a lot,” Lince said. “Now that I’ve been working with him for two years. He’s the first one to come in. Everybody leaves, and we’re still doing finishing drills. It’s his work ethic that he’s had since he was young that has helped him so much.”

His physical and technical skills are one aspect of his game, but head coach Damian Magallan noted De Los Santos’s knowledge of opposing defenses. The striker can manufacture chances and space by drawing markers away from a play.

“He’s really intelligent on the pitch,” Magallan said in Spanish through Lince. “He likes to move around, move the defenders around also, because sometimes they have two players on him. He will (move) those defenders with him, creating those spaces for (Jorge) Amaya, for Roy (Saldivar), who are sophomores. They’ve been working with us in the same system since eighth grade.”

In the playoffs, the goals continued coming from De Los Santos and the Tigers supporting cast. He booted three more postseason hat tricks, including in the regional final game against Brownsville Veterans in Corpus Christi.

When the dust settled and Valley View was eliminated by back-to-back state champions Frisco Wakeland, De Los Santos clearly wasn’t just happy with a 70-goal season and a trip to state.

“We knew that in playoffs it’s a different story, since there’s a lot of scouting and people talking to each other,” De Los Santos said. “Again, sadly, we were one game away. For sure, we will (work) harder for the next year. A lot of us didn’t know what it was to reach all the way to state. Now, we have that experience, and we will work the double for next year.”

Valley View and De Los Santos’s hard work will begin earlier this season, as they move into the “district of doom,” District 32-5A, due to UIL realignment, joining Lower Valley powerhouses like Brownsville Veterans, Lopez, Pace, Porter and Donna High.