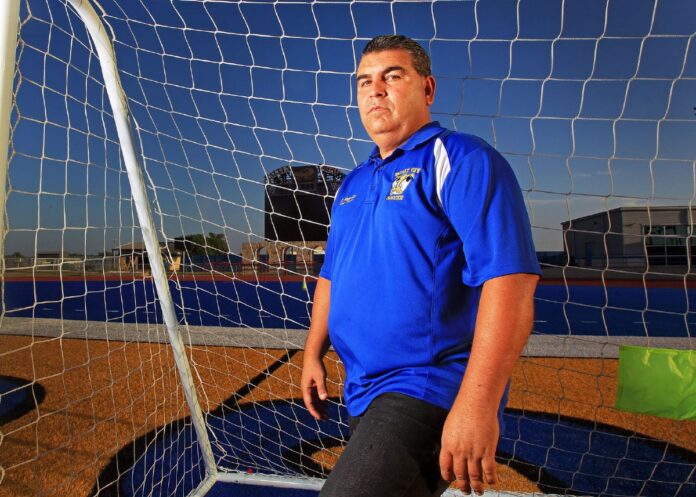 For the team that plays on the blue field, expectations are sky high. Even in arguably the toughest area to qualify for the Class 5A state soccer tournament, the Valley View Tigers enter with a “state or bust” mentality.

Coach Damian Magallan’s ability to lead a consistently dangerous group and secure a berth in the state tournament this season earned him The Monitor’s All-Area Coach of the Year honors.

Magallan has been successful in his eight-year tenure at Valley View, but that hasn’t stopped him from learning and developing as a tactician.

He embraces those lofty goals and expectations, but his days of relying on a singular star player and just sending him long balls are over.

“In other years, we’ve been dependent on Torito, Jose Angel Soto, but now our style is a little bit different,” Magallan said in Spanish through assistant coach Israel Lince. “We have Mario De Los Santos, but we have other young players that can actually contribute to the team. When they are defending two against him and he couldn’t score, we have Roy (Rogelio Saldivar) coming up in big games, Carlos Medina coming up in big games.”

“That was really helpful for us, since before we were just depending on one player,” Magallan said. “When he didn’t have a good night, the team would struggle. We think that helped to go much further in the playoffs (this year).”

Lince played his final two years under Magallan alongside Soto on state tournament teams before playing on scholarship at Our Lady of the LakeUniversity.

He says playing under Magallan as a junior and a senior was a unique experience. Now, as a young coach himself, he can learn Magallan’s technique and see a new perspective.

“He would always push me to fight for more, want more,” Lince said. “He built ambition in me. Now, I see why he would make some movements, why he would get after me. As a coach, you see differently on the outside than the inside.”

Lince’s growth under Magallan earned him a role as the junior varsity light head coach — a position that allows him to help build the youth pipeline to the varsity program.

“Since Magallan got here, we knew the expectations,” Lince said. “That way, when we were working, if we would slack off, he would remind us, ‘Hey, remember what we are trying to reach.’ Setting such high expectation, it just builds a culture. Now, the young kids come out and watch the playoff games. They know we’re traveling all the way to Georgetown.”