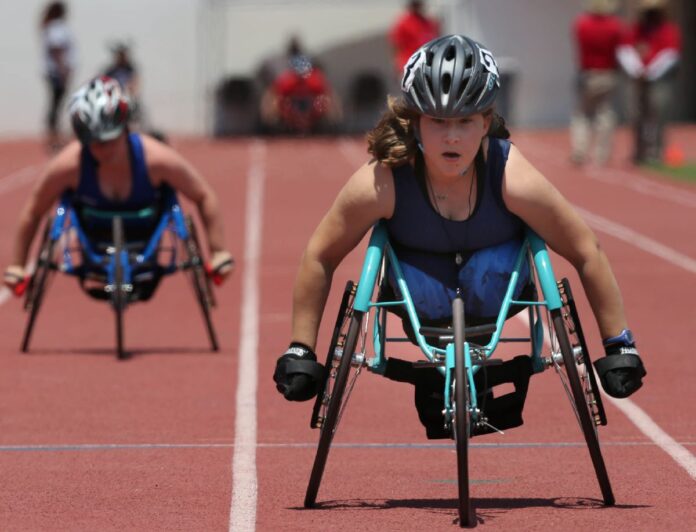 Her outgoing personality and willingness to strike up a conversation with strangers came as a surprise, especially when they heard she was only in ninth grade.

The regional meet was special for Swanson because she had the chance to compete against opponents instead of simply racing against the clock. In the Valley, she is the only female wheelchair athlete participating in track and field.

Swanson has been overcoming spina bifida — a birth condition that prevents proper spinal cord and spine development — to compete in athletics since she was 8 years old. She learned to swim at 4.

“I mostly gravitated toward triathlons and swimming, because that’s what my older sister and my dad did — well, still do,” Swanson said. Her first triathlon, at 8 years old, was a success, but she wasn’t satisfied. “I got first, but I felt really slow. It’s difficult in the water. I’m basically dragging my lower half of the body with me. It’s all arms.”

She joined track in seventh grade at Cathey Middle School, and that’s when she learned her legs could become sore. Usually, she has minimal feeling in her lower body. Nothing came easily as she improved.

“I was pretty slow in middle school. It took a lot of work to get where I was now,” Swanson said. “It helps a lot, already sort of having muscles. I’ve been pretty muscular in my upper body since I was little.”

McAllen Memorial girls track coach John Stanley has taken on the task of coaching her. In December, he received some pointers from Paralympic royalty Saúl Mendoza, a former Paralympic and Olympic champion for Mexico.

“Right from the get-go, Saúl told me, ‘This girl is going to be special. She’s got a lot of potential,’” Stanley said. “As soon as he told me that, all I did was convey that with her. To be honest, it doesn’t shock me. When you’re around people that expect greatness, she’s going to produce.”

Her father, Casey Swanson, who still cycles and competes in triathlons, was impressed by her hasty improvements.

“I’m surprised how much time she dropped in her events just over the past year,” Casey Swanson said. “She likes it so much, but the coaches have been so good.”

Casey Swanson said Suzannah’s ability to enjoy herself despite being alone for most of her races stands out.

“She’s all by herself a lot of time. It takes a lot to do that,” Casey Swanson said.

Stanley tried to remedy that as best he could. Whenever possible, he asked meet organizers to let Suzannah race against junior varsity competitors in open events like the 400 or 100.

“It makes a huge difference, even if it’s just subconsciously,” Suzannah said. “‘Oh, there’s someone next to me. I need to beat them.’”

She’ll have two more races this year to try to best her peers, and they will be her fullest high school races yet. Three other girls will fill the lanes in the 400 race, and six others will compete in the 100 today at Mike A. Myers Stadium in Austin.

In the sprint, she’ll be seeded third and run sandwiched between the first- and second-seeded racers, who were just more than a second quicker in their regional races.

While Suzannah, her father and her coaches are all hoping for gold, Casey knows that every race is an accomplishment, no matter the result.

“We couldn’t ask for more. I’m so impressed that she’s even out there,” Casey Swanson said. “It doesn’t matter if she places top three. Just that she gets out there and competes.”

“I was pretty slow in middle school. It took a lot of work to get where I was now.”