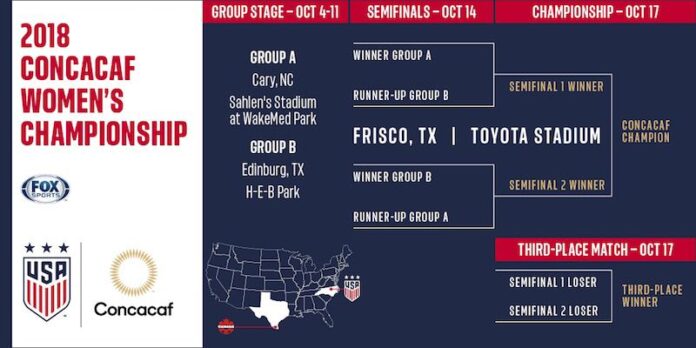 EDINBURG — The road to the 2019 Women’s World Cup will run through Edinburg, as H-E-B Park is set to play host to six matches as part of the 2018 CONCACAF Women’s Championship, which will produce at least three World Cup qualifiers.

Canada, the No. 4 team in FIFA’s latest rankings, will headline Edinburg’s four-team Group B, which will be contested with three round-robin doubleheaders Oct. 5, 8 and 11.

“I keep saying it over and over every time we do a different event, but I believe this is the biggest soccer event in the history of the Rio Grande Valley,” RGV FC Toros and H-E-B Park president Bert Garcia said.

Edinburg will not play host to the United States women’s national team, which will compete in Cary, North Carolina, as part of Group A of the CONCACAF Women’s Championship.

Garcia said H-E-B Park had been positioned to host the U.S. women’s team in a friendly against Mexico that was instead played Sunday in Houston. He said “travel circumstances” made the U.S. unable to play the game in Edinburg. The team also participated in a friendly against Mexico on Thursday in Jacksonville, Florida. CONCACAF and the United States Soccer Federation instead awarded H-E-B Park the CONCACAF Women’s Championship group matches.

Garcia said he is hopeful a positive experience can pave the way for Edinburg to host the U.S. women’s national team in the future.

“I truly believe so,” Garcia said. “I think we’ve already positioned ourselves for that. I think it will happen.”

“This is just the tip of the iceberg for us,” Garcia later added. “Hosting something this big will draw more eyes to us and more attention to us, and I think U.S. Soccer knows who we are now. For me, at the end of the year, I could see a possibility of us hosting a friendly with U.S. soccer. Women’s, for sure. At least that’s been the conversation.”

The teams competing in October’s competition in Edinburg will be unclear until the CONCACAF Women’s Championship draw is held in September following summer qualifying.

The U.S., Canada and Mexico are guaranteed to be among the eight teams split between Edinburg’s Group B and North Carolina’s Group A, though only the U.S. and Canada have been assigned groups ahead of the official draw. The remaining field will be filled by two qualifiers from the Central American zone and three from the Caribbean zone.

The Central American zone is made up of Nicaragua, Costa Rica, El Salvador and Panama, with a qualification tournament set to take place in June. The Caribbean zone’s competition will feature 22 teams, with group stages held in May and the final round taking place in July.

The top two teams in each group of the CONCACAF Women’s Championship will advance to the knockout stage, which will be contested Oct. 14-17 in Frisco. The top three teams earn a spot at the 2019 Women’s World Cup in France, with the fourth-place finisher entering a playoff for a berth against a team from CONMEBOL.

Mexico is No. 25 in the latest FIFA world rankings, rated as the third-best team in CONCACAF’s competition. Details of the CONCACAF draw system are unclear, but in most typical formats the third-ranked team would be placed in the group opposite the top-ranked United States, meaning Mexico would likely join Canada in Edinburg’s Group B.

“I think for business sense for all of us — the tournament, CONCACAF, U.S. Soccer — it would be beneficial for us to have Mexico,” Garcia said.

Looking ahead, Garcia said the stadium is in line to host two more friendly matches and is having conversations about bringing in English Premier League teams or one of the Mexican national teams.

“To say in the first year or year and a half of existence, to say you’re holding a CONCACAF champions league game, I wouldn’t imagine it,” Garcia said. “Now, to say we’re able to do business with U.S. Soccer and be able to host something on their behalf, I would never have imagined it.”