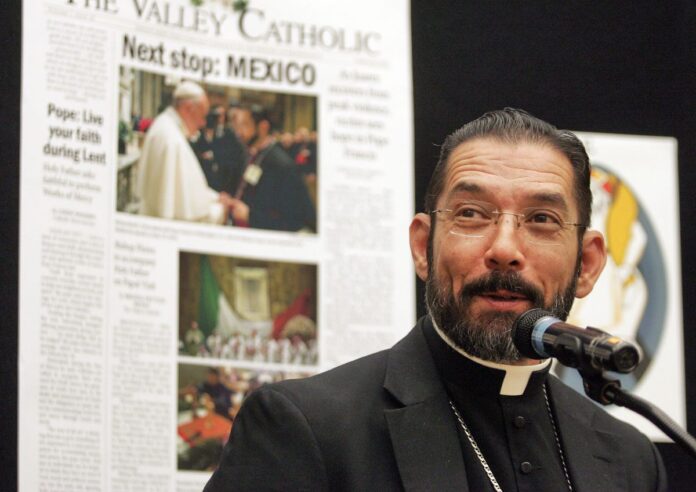 Bishop Daniel E. Flores of the Diocese of Brownsville issued a statement Wednesday expressing the sorrow of the Catholic Church regarding the 1960 murder of Irene Garza by a member of the clergy.

“As a Catholic, as bishop of this local church, and as a human being I am horrified by this,” the bishop wrote in a message posted on the diocese website. “The suffering caused to so many by this crime in incalculable.”

“On behalf of the church, for the sinful actions of members of the church, I express this sorrow to the family, and to those whose faith has been injured by these events,” the message continued.

John Feit, 85, who served as a priest in the McAllen area in 1960, was sentenced to life in prison on Dec. 8 after a jury found him guilty of Garza’s murder. An autopsy report confirmed that the schoolteacher died by asphyxiation, likely by suffocation.

Addressing evidence introduced during the trial that suggested a conspiracy between the church and law enforcement at the time shielded Feit from prosecution, the bishop said he has no answers.

“The Diocese of Brownsville did not exist back then and I have no special insight into what was done or not done by civil and church authorities in the aftermath of the crime,” Flores said in the statement. “And answers to many questions about what people around the investigation were thinking and doing in 1960 were not given in the verdict.”

Jurors were shown an October 1960 letter between clergy officials regarding the case that suggested that officials feared bad publicity from the conviction of a priest would trigger political ramifications extending from the Rio Grande Valley to the White House.

Rev. Joseph Pawlicki, a pastor at a church outside Austin, wrote to Rev. Lawrence Seidel, the head of the Oblates of Mary Immaculate order to which Feit belonged, urging him to hire a private investigator to find “loopholes” in the state’s case against Feit.

Then-Hidalgo County Sheriff E.E. Vickers’ re-election chances and the presidential campaign of John F. Kennedy — both of whom were Catholic — would be at stake if Feit was charged in Garza’s death, according to the letter.

“I am deeply grieved at the thought that political and religious struggles, competing interests vying for advantage, were at play as decisions were being made on how to proceed with the case,” the bishop’s statement reads. “Whatever factors contributed to the 57-year delay in reaching a verdict in this case, Irene Garza, her family, and the whole Rio Grande Valley deserved better than that.”