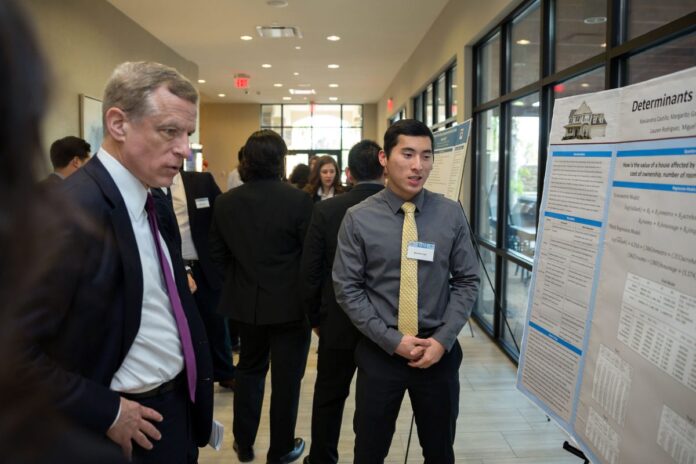 McALLEN — As Mexican shoppers have spent less money in Texas in recent years, Robert S. Kaplan urged the state, and country, to not look elsewhere. That’s not only because the United States relationship with Mexico is murky, but because having strong ties with the southern neighbor is in the best interest of the country.

As president and CEO of the Federal Reserve Bank of Dallas, Kaplan knows the value of the Mexican commerce coming into the country.

Specifically, he tracks foreign spending in the Rio Grande Valley, and knows how valuable it is to the region and the state. He emphasized a strong relationship between the two countries on Friday during a University of Texas Rio Grande Valley symposium at the Embassy Suites Hotel.

As the North American Free Trade Agreement renegotiation trudges on, with no end in sight, and threats from President Donald Trump to pull out of the two-decade-old pact, Kaplan said that would be unwise.

“I think both sides knew it would have to be updated,” Kaplan said, without directly commenting on national or statewide politics. “The issue is whether we’ll be able to successfully renegotiate that agreement — I’m still hopeful that we will. I think it’s in the strategic interest of the United States. It’s very important to the U.S. to maintain that trade relationship. It’s critical, I think, to U.S. competitiveness and U.S. jobs, and competitiveness in this hemisphere.”

Kaplan is also acutely aware of the importance of maquiladoras to this region. One of Kaplan’s chief principals is pushing educational attainment in America, which he said concerns him greatly. Similarly, Mexican maquiladoras are experiencing a tentacle of that education problem with its workforce, he said.

“The second thing I think, strategically, they’re going through a transition where labor, initially, was a reason people located activities there,” Kaplan said. “Increasingly, they may have to move up the value chain in terms of more technology oriented, less low labor-rate dependent activities, and i think they’re wrestling with that transition.”

“Normally you can’t stay there,” he said, “because you need to move up the value chain and I think Mexico and the maquiladoras are wrestling with the implications of that challenge.”