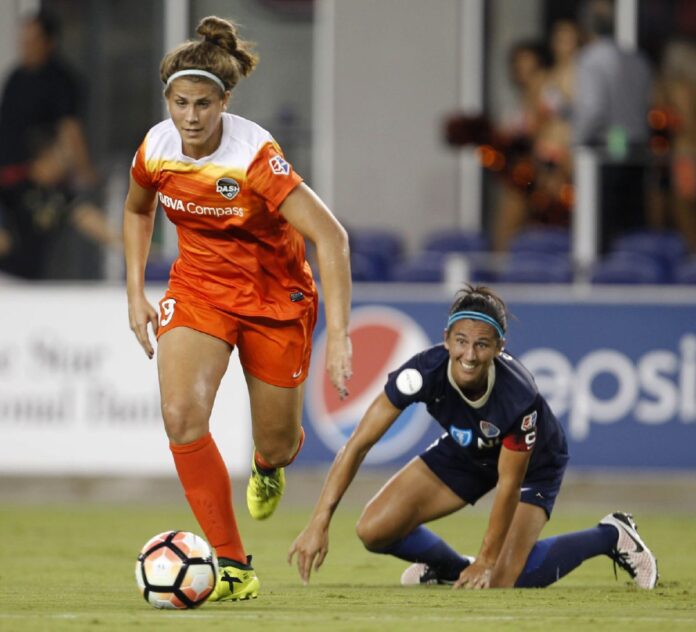 EDINBURG — On a special night for Rio Grande Valley soccer and athletics in the region as a whole, the Houston Dash fell 4-0 to the North Carolina Courage.

The game was postponed and moved from Houston to the Valley following changes to both the Dash and Dynamo schedules as Hurricane Harvey rolled through the area.

Rain in Edinburg cleared up just before Wednesday’s opening kickoff, and some of the nation’s best women’s soccer players were on display under the lights.

Kristie Mewis, a midfielder for the Dash, was happy with the crowd that came dressed in familiar orange apparel.

“I thought the support was awesome,” Mewis said. “It’s a great field. They welcomed us with open arms. It was great. Obviously, we wished we could have given them a little bit of a better show on our end. I think it kind of just all caught up to us. It’s been a long season and, obviously, a losing season.”

Mewis was against a familiar face on the opposing team. Her younger sister, Sam Mewis, is a midfielder for both the Courage and the United States Women’s National team. Sam opened the game’s scoring in the 13th minute.

“Sam and I are just very proud and humbled to kind of be an inspiration for some of these little girls,” Mewis said. “This has always been our dream to play professional soccer, and to be able to do it together is just so special. And I think that any little bit that we can give back and that we can show the young kids that two sisters can do this. I hope there are hundreds of little sisters that want to grow up and play together just because of me and Sam.”

Despite the Dash losing, players from both teams were swarmed by young fans — a vast majority girls — yelling for autographs and photos with some of their idols.

Dash interim coach Omar Morales emphasized the value of fan interaction, especially in a place that hadn’t seen professional women’s soccer, or women’s professional team sports of any kind, before.

“I think it’s important,” Morales said. “In order for our game to grow, on the women’s side, it’s important for us to be good ambassadors and good for the fans and the kids. I think our team embraces that. For the kids that were able to come out, it helps to give them a goal to somehow and someday be a part of a professional organization.”

“I think it was great,” Morales said. “I think that everybody here at H-E-B, with the organization and the Toros, has been phenomenal. Everything’s been first class, everyone’s been pretty welcoming, and so we obviously appreciate. For us, we wish we could have gotten a result and showed our appreciation that way.”

Lynn Williams of the Courage was another national team member who found the back of the net with some slick moves to beat two defenders before finishing into the far corner.

Another piece of the star power on the pitch Wednesday night was Dash goalkeeper Jane Campbell. With Carli Lloyd and Kealia Ohai out with injuries, Campbell was the only Dash player on the USWNT who was in action Wednesday.

The goalie had the support of the drum corps behind her, even if her defenders didn’t give her the support she needed.

“We only knew about the RGV just because of the Dynamo. So in all honesty, we were kind of like, ‘Where are we going?’ But when we got down here, I was amazed,” Campbell said. “The fans who showed today were amazing, and it’s kind of cool to know that we have a home away from home. With Harvey hitting us, it’s nice to know that you guys are almost like a home away from home for us.”

With Wednesday’s win, North Carolina claimed the NWSL Shield, which is awarded to the best regular-season team in the 10-member National Women’s Soccer League.

Morales said there is a lot to learn from the squad his team faced Wednesday.

“I think they’re a very dynamic team,” Morales said. “They’re a team that can hurt you in a lot of different ways. I think the one take that we would like to see from our team is not only the competitiveness for 90 minutes, but also the type of players they have. The type of player with a mentality to go through a wall if that’s what’s required to win a game or a championship like they did tonight.”