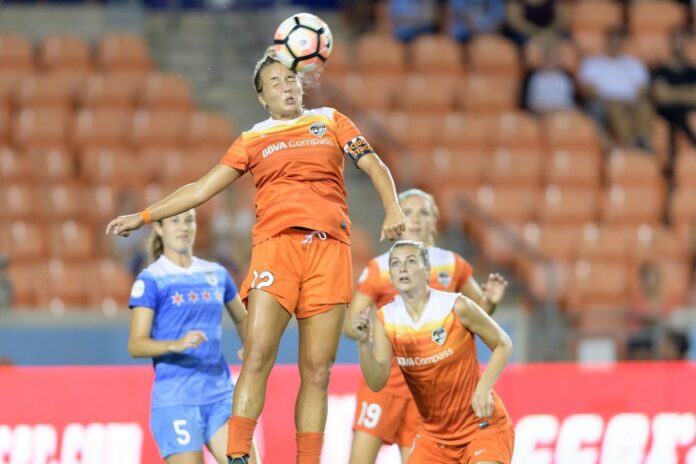 EDINBURG — Before the Houston Dash arrived in Edinburg, Houston Dynamo President of Business Operations Chris Canetti wanted to make sure the players knew they would be making a measure of history.

The Dash will face the North Carolina Courage in a National Women’s Soccer League match at 7 p.m. Wednesday at H-E-B Park, making up a contest originally scheduled for Aug. 27 in Houston that had to be postponed and relocated due to Hurricane Harvey. The game is believed to be the first professional women’s team sport event to be held in the Rio Grande Valley.

“It’s great that our club and our players and our league are going to be a part of something that’s a first for the community in the Valley,” Canetti said. “These girls are trailblazers and groundbreakers in every way shape and form. This is, in another way, an example of that.”

The 10-team NWSL is in its fifth season of competition after being established in 2012. The Dash, which is operated by RGV FC’s parent club, the Houston Dynamo, joined the league in 2014.

Houston is eighth in the NWSL standings with a 7-13-2 record, already assured of missing the playoffs with just two games remaining on the schedule. North Carolina ranks atop the standings with a 15-6-1 record, looking to defend a championship the franchise won last year playing as the Western New York Flash.

“It’s a huge deal for the Valley, it being the first professional women’s sporting event, in my opinion, that we will ever host,” RGV FC Toros and RGV Vipers president Bert Garcia said. “Especially when we get the caliber of players that North Carolina and Houston Dash present, I think it’s great for the Valley.”

The NWSL is home to many of the top names in women’s soccer. Carli Lloyd, a Dash midfielder, was the FIFA Player of the Year each of the past two seasons and helped the United States to a pair of gold medals and the most recent World Cup. Lloyd’s status for tonight’s game remains unclear, however, as the Houston Chronicle on Sunday reported that “it appears” Lloyd will not play again this season due to a left ankle sprain suffered during a match Aug. 13.

Garcia said he had wanted to bring a Dash match to the RGV for some time, and Canetti said he was open to the possibility of playing future matches in Edinburg.

For the Dash, the road trip for a home fixture is a chance to expand the team’s reach to a different part of the state.

“To us, this is a unique opportunity to share the game with a new community,” interim head coach Omar Morales said in a statement. “We look at this as an opportunity to bring the best soccer players to a market that only watches them on television.”