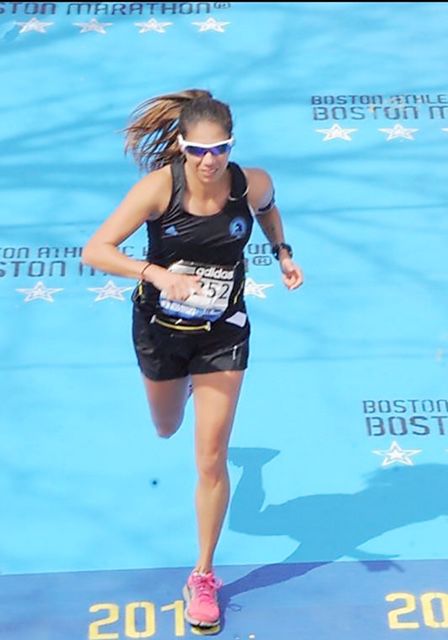 BY AMANDA A. TAYLOR

Cyndi Mendez-Karr has been running since she was a little girl. She fondly recalls racing with her father growing up, but never realized what kind of impact the hobby would have on her later in life.

“I remember racing with my dad many times across the yard, on the street — almost everywhere we had a chance,” the McAllen resident said. “I ran in high school and a couple of years in college but I stopped when I got married and had my children.”

Karr decided to pick up running again in 2010 after watching her first full marathon. She never thought she’d pick up running as a hobby again, but she had a new dream of running the Boston Marathon.

On April 15, 2013, Karr’s dreams became reality once she found herself at the starting line of the Boston Marathon.

“That race holds a very special place in my heart because of many reasons,” the 46-year-old said. “It was my first time running the Boston Marathon but the feelings of excitement turned into feelings of fear and anger after finishing the race.”

Twenty minutes after Karr crossed the finish line, two homemade bombs detonated 12 seconds apart from each other near the finish line of the marathon. Karr had just been reunited with her family who were waiting for her at the end of the race when she heard the bombs go off. The terrorist attack resulted in three people killed and many others severely injured.

“We were walking into the hotel as they went off,” she said. “I had gotten sick half way through the race and felt horrible so I made my husband take me back to the hotel which was just a few blocks down the road. I often wonder about the ‘what ifs,’ but I just thank God that my family was unharmed.”

Although the Boston Marathon bombings were undoubtedly horrific, it didn’t hinder Karr’s motivation to continue to train in the hobby she loves. In fact, she returned to run the Boston Marathon again in 2015 and 2016, and she plans to keep attending in the future.

“I witnessed just how resilient the city of Boston is,” she said. “We say ‘Boston Strong’ because the city showed the world that hate cannot win.”

Karr is training to run the Berlin Marathon in Germany later this month. Karr’s training methods include a combination of various workout plans she’s used in the past that coincide with her schedule and routine.

“You find what works for you after you’ve ran a few races,” she said. “You need to build your endurance at first and you do that by slowly adding miles to your long runs. We all have our reasons for running — I do it because of the feeling I get afterwards. It’s the easiest form of exercise and you don’t need any equipment, just a good pair of shoes.”

Karr plans on attending the McAllen Marathon for the first time in January. She relies on her running group to keep her motivation up and their support helps her set training goals for upcoming races.

“This year, God willing, I will be running the streets of McAllen along other marathoners,” she said. “My motivation comes from the goals I set for myself. It takes dedication — you say goodbye to many late night barbecues.”