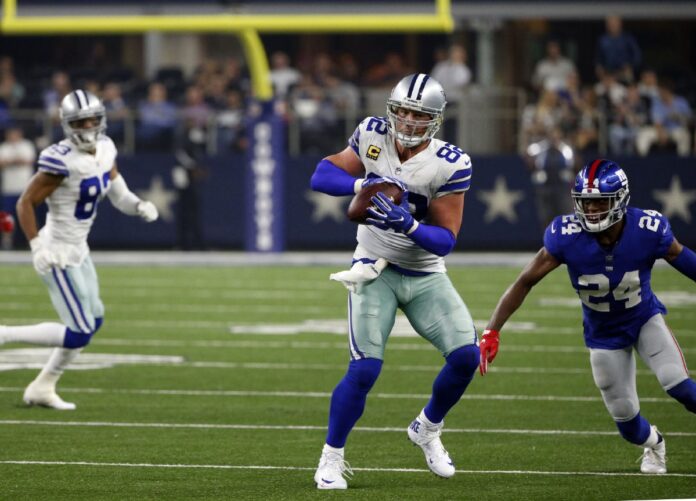 BY BY BIANCA MUJICA

“There have been so many great teammates and coaches that have helped me get there. You don’t achieve something like this on your own.”

During an interview about becoming the new Cowboys all-time leading receiver, tight end Jason Witten moved the spotlight from him to the who that have pushed him forward.

Witten’s catch and touchdown against the Giants put him at a total of 11,906 receiving yards in his career, according to the NFL. The previous record of 11,904 yards was set by Michael Irvin, who played wide receiver from 1988 to 1999.

Although he was surpassed, Irvin immediately reacted to the breakthrough on Twitter with nothing but excitement.

“Congrats (to) @JasonWitten on @DallasCowboys record!” Irvin wrote.” “(You) have earned it & (no one) deserves it more. WE ALL HONOR YOU!!!”

Witten also received recognition from Drew Pearson, another wide receiver from the 70s and early 80s. Behind Witten, Irvin, and Tony Hill, Pearson is fourth on the list with 7,822 yards.

“Congrats on the record,” Pearson posted on Twitter. “You could have played for Coach Landry back in the day, and he would have loved you.”

This is not Witten’s first time at the top of his team’s list. Since being signed in 2003, the career Cowboy has played 224 games in 15 seasons —tied with Ed “Too Tall” Jones from the 70s and 80s for most games played with Dallas.

This achievement seemed to have a bigger impact, especially on Cowboys owner Jerry Jones.

“I just swelled up with pride when they announced that he had broken that record,” Jones said. “I’m really proud for him.”

Receiver Cole Beasley, who had his own shining moment Sunday with a one-handed catch, said there’s a general respect for Witten’s abilities

“He’s the greatest of all time to me at tight end, and shoot, he’s even better than most receivers,” Beasley said. “He does it all: blocking and getting open and catching the ball. He’s the ultimate team guy.”

Beasley said any rookie looking for a role model in the NFL should simply look at Witten.

“You can learn so much from that guy,” Beasley said. “I know I have, and I know a lot of our other players have, too.”

Despite all the praise, Witten appears to remain humble.

“To be able to pass [Irvin], it’s a huge honor for me, because I know what he was all about,” Witten said. “Many days, it’s hard, and it’s a struggle to get out of bed, but you keep pressing forward and you pursue that excellence.”