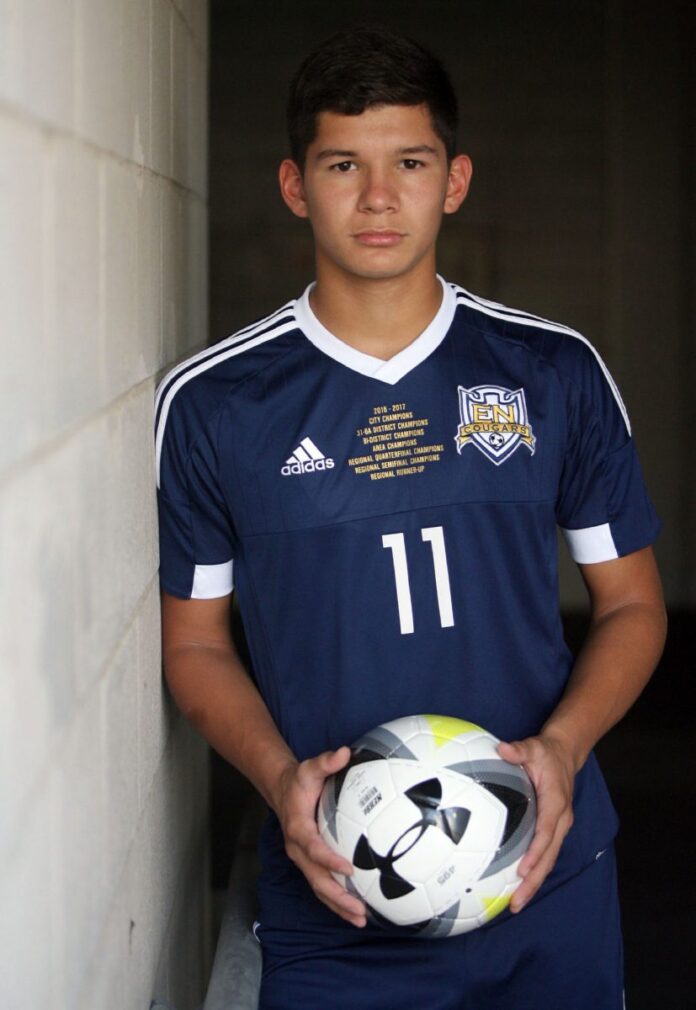 Nominally, Edinburg North senior Azael De Leon was a center back. After playing forward during his freshman and sophomore seasons, De Leon moved to fill in a hole on defense during his junior year and remained in that role for his senior campaign.

The title didn’t keep him from being the Cougars’ leading scorer. While holding down the back line, De Leon found the back of the net again and again on an array of free kicks and headers, helping spark North to its best season in program history and a trip to the Class 6A Region IV final. For his effort, De Leon is The Monitor’s All-Area Defensive Player of the Year.

“I was surprised,” De Leon said of the honor. “It feels amazing to accomplish this my senior year. It’s just real exciting that I got chosen with the hard work I put in all year. It was my teammates that helped me out a lot.”

De Leon said he thinks he’s most potent on free kicks, like the 35-yarder he drilled to lift Edinburg North to a 2-1 win against Harlingen South in the bi-district round. Moran said De Leon scored on kicks of about 40 yards five times. The senior also notched a hat trick in a 3-1 win against PSJA North.

“He was someone to be worried about, because he has a very powerful leg,” Moran said. “He has that technique, he has the idea, and he has everything it takes to score. That’s why we gave him the freedom to not only stay in the back, but if you have the space and you have all the area to run and move, you’re free to go.”

Moran said De Leon needed a season of experience to feel at home in the defensive role. By senior year, De Leon had developed into the ideal leader and motivator, helping maintain tactical order throughout the formation.

“This year, it was one of those years where I was always screaming and helping my team,” De Leon said. “Telling them to keep on going to the last minute, to the last blow of the whistle. This year was really amazing. … Last year toward the middle of the season, when I transitioned from forward to center back, something happened to me, and it was just amazing how I tried to help my team as much as possible.”

De Leon will be attending UTRGV next year as a mechanical engineering major, and he said he plans to attempt to walk on to the soccer team.