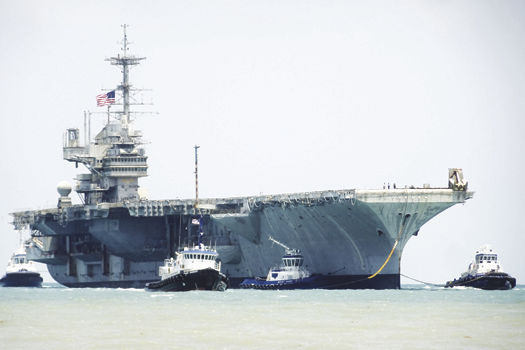 BROWNSVILLE — A crowd showed up at Isla Blanca Park yesterday to bid farewell to the decommissioned USS Independence.

Among them were a number of Navy veterans who served aboard the aircraft carrier.

One of them was Jack Gonzalez, a native of Puerto Rico who grew up in New York and now lives in Corpus Christi. He served aboard the Independence from 1964 to 1967, including a tour off the coast of Vietnam in 1965, as a boatswain’s mate.

Gonzalez fondly remembers his promotion — per naval tradition — from “Pollywog” to “Shellback” upon crossing the equator, and then to “Blue Nose” after crossing the Arctic Circle.

“Those are two memorable moments,” he said.

The Independence’s 16,000-mile journey to the Port of Brownsville from Bremerton, Washington, ended yesterday afternoon. It is due to be dismantled.

Seeing the Independence headed to the shipbreaking yard was heartbreaking, Gonzalez admitted.

“I worked on a tugboat after I retired, and I brought in the Lexington into Corpus Christi,” he said. “I helped bring that ship in there as a museum. This one could have very easily become another museum somewhere — South Padre Island.

“She was just a great ship. I learned a lot, a lot of discipline. It set me up for the rest of my life. My career in the Navy helped me in my civilian life.”

Gonzalez, who spent eight years in the Navy and then worked as a merchant marine until retirement, said he made a lot of friends on the “Indy,” some of whom he still keeps in touch with 50 years later.

Gonzalez also recalled this experience: “We were supposed to go into a port in South Africa, but the government there, due to apartheid, didn’t want the blacks to go ashore. So the admiral and the captain said, OK, we’ll just keep on steaming. And we just went right by South Africa, and our next port was in Singapore. We had a blast in Singapore.”

James Ory, originally from Corpus Christi and now a resident of San Antonio, served on the Independence from 1970 to 1971. It was a positive experience, though his job on the ship’s No. 3 waist catapult was hard work, he recalled.

“You don’t get a lot of time off when you’re working where we were working, up on the flight deck,” Ory said. “It’s like a baseball game. The pitcher and the catcher are 90 percent of the game. The purpose of the ship is flying airplanes, and it takes a catapult to launch them all.”

It was quite a white-knuckle experience for a 20-year-old, he said.

“You’ve got running airplanes. They’d blow you around. You’ve got wind coming across the bow all the time. You’ve got wind, you’ve got jet blast, things hanging down on the airplanes that’ll rip your back up, tear your head open. The biggest thing they teach you is stay away from the (jet) intakes. We had a propeller-driven airplanes on there and jets on there. It was very crowded, very busy.”

And dangerous of course: A lot of guys didn’t make it, he remembers.

Ory said he still keeps in touch with friends he made onboard back then, and plans to send photos from Thursday’s arrival to former shipmates in Boston and Michigan.

“You’ve always got a connection to a ship — especially your first ship,” he said. “It’s the last time I’m ever going to see it.

“It was really part of growing up. You get out of high school, you play around with a few jobs, work at a gas station, doing this, doing that. But when you go get on that thing, that’s where it’s at. That’s where you’re going to start learning to be responsible, take orders. And you make a lot of good friends, because you’re with them day and night.”

Robert Maxwell served on the Independence from 1976 to 1979 as a boatswain’s mate. A New York native, he moved to San Benito straight from Norfolk, Va., the carrier’s home port, right after leaving the Navy and still lives in the same house.

Maxwell said he was proud to have served aboard the ship but didn’t necessarily enjoy being at sea, feels no emotional attachment toward the Independence and doesn’t mind that it’s being scrapped — though he still came out to see it Thursday.

“It was a little bit different back then, back when there was a lot of prejudice,” Maxwell said. “Back in the ‘70s there was still a lot of hate for blacks, all that stuff.”

All the same, it was an education, he said.

“I learned a lot,” Maxwell said. “I learned to drive boats, that’s for sure. Learned to grow up, I think. It’ll make you grow up for sure.”

He spent a considerable amount of time with the Independence in dry dock at Portsmouth Naval Shipyard and received commendations for his work overhauling the ship.

Pat McDermott, a Harlingen resident and self-described Navy brat, was hanging out with Maxwell, who he’d just met. McDermott served on the Independence from 1988 to 1991 as a boiler technician in the engine room and said he had a great time in the Navy.

“I was probably just turning 19 when I got on it,” he said. “It was my first cruise, taking it around the Horn (of South America). Our first stop was St. Thomas. Rio de Janeiro was the next stop. Acapulco after that, and then San Diego. What’s not to like?”

McDermott put two Western Pacific cruises under his belt, sailed to the Middle East, all over Asia, and Central South America, he said. When Saddam Hussein invaded Kuwait in 1990, the Independence was the first U.S. carrier to enter the Persian Gulf in 28 years, McDermott said.

“I had a blast the whole time,” he said. “Working in an engine room, bad stuff happens, but that’s what we train for. It’s basically a big, controlled explosion going on there.”

“When you’re a kid that age, it’s the first time somebody says, here’s this couple-million-dollar piece of equipment. I need you to tear that down and rebuild it. OK, give me a tech manual. I’ve got this.