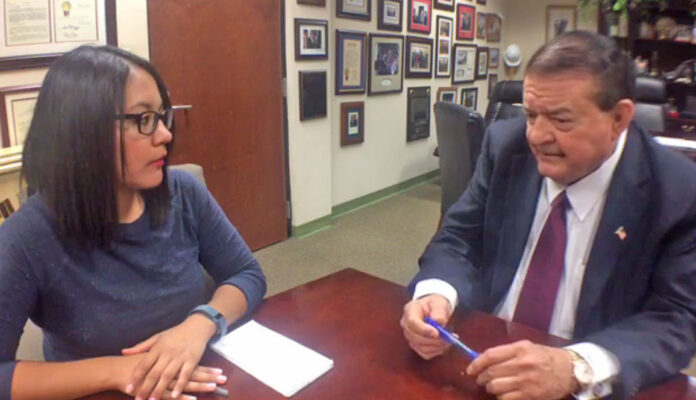 MISSION — A week after the mayor here publicly criticized county leaders for not asking taxpayers if they want to build a new courthouse, he defended a $16 million project for the city that also circumvented voter approval.

Mission Mayor Norberto “Beto” Salinas argued the comparison between the construction of the new courthouse and an events center under way in Mission is not a valid one, though neither went through a referendum.

Salinas said his project is significantly smaller and will not put a strain on taxpayers. Hidalgo County Commissioners, however, have repeatedly promised the same thing, vowing the courthouse will not lead to a higher tax rate.

Salinas takes issue with the county’s position, saying his project will likely be paid in full within the next five years while also promising to cut the tax rate by “one or two cents” this year.

It’s important to note that at least week’s county meeting, commissioners indicated the price tag for the courthouse has fallen to about $115 million with the help of outside public funds.

Edinburg signed a legally binding interlocal agreement to contribute $30 million to the project, while the Hidalgo Metropolitan Planning Organization has pledged $20 million for drainage improvements in and around the courthouse square.

While county leaders haven’t raised the tax rate in about a decade, property valuations have continuously gone up, giving local government more bang for their pennies. In Mission, every penny collected equals to about $400,000 for the city coffers, while one cent is equal to about $3 million for the county.

Salinas argues the county is bloating its budget.

“It was 78 million dollars when Judge Eloy Pulido left,” he said about the former county judge. “When Ramon Garcia came in all he did was spend all of the income that came from new values. They should have given the taxpayers some of that money back. They are spending 132 million dollars more per year than the past commission.”

The Mission mayor said the city plans to pay half of the $16 million debt next year, and has devised a plan to pay it off completely in five years.

“If it would have been more than $30 million I would have done a referendum,” he said. “I had a hard time convincing myself to build that convention center because I did not want any debt.”

The 40,000-square-foot facility, which will be located off of Shary Road and Victoria Avenue, is currently under construction and is expected to be completed early next year.