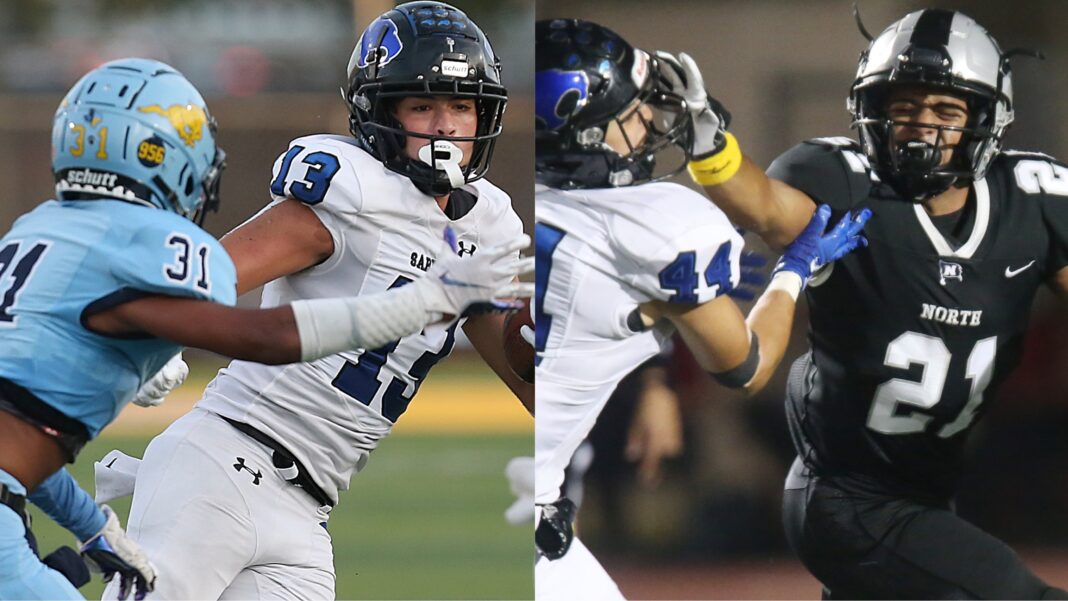 McAllen Memorial and PSJA North have one thing in common besides qualifying for the regional semifinals during the 2021 UIL postseason — they both faced Edinburg Vela earlier this year.

The Mustangs, Raiders and SaberCats are the last three Rio Grande Valley teams in this year’s playoffs. Those early-season battles — a marquee non-district matchup between Edinburg Vela and McAllen Memorial and a District 31-6A slugfest between Vela and PSJA North — showcased three of the RGV’s top teams, but it was also an opportunity for iron to sharpen iron.

Edinburg Vela fifth-year head coach John Campbell, who has coached the SaberCats into the regional semifinals in four of his five years at the helm, said playing against stiff competition helps develop the physical talent of a team, but more importantly, builds mental and character traits. The SaberCats took down McAllen Memorial 42-6 in their season opener and topped PSJA North 24-0 during their district opener in Week 3.

Even after tasting defeat early on, both the Mustangs and Raiders used those losses against Vela as building blocks for the rest of the season.

“Any time you play a team of that caliber, it’s going to pay dividends,” McAllen Memorial first-year head coach Moses Patterson said. “Obviously, we didn’t like the outcome, but it’s going to force you to really reflect and take a hard look at what it is you need to work on and get better at early at that time of the season.”

Since that Mustangs loss against Vela on Aug. 27, the Mustangs have ripped off 11 straight wins to march their way into the Region IV-5A DI semifinals for the first time since the 2010 campaign.

As for the Raiders, sixth-year head coach Marcus Kaufmann said this season means a lot to his group, and they take losses personally. PSJA North responded to its loss against Vela on Sept. 9 by going on a six-game winning streak. The Raiders’ vaunted “Blackshirt defense” limited their six opponents to just 29 points scored during the streak.

“One of the main quotes that we live by is ‘it’s not about wins or losses — it’s about how you respond to them.’ How will you react after them?” PSJA North senior middle linebacker John Castro said. “We learn from our mistakes, get ready for the next week and keep on moving forward.”

Now, all three teams carry the RGV’s football torch into Round 3 of the playoffs.

MUSTANGS ON THE MOVE

The McAllen Memorial Mustangs underwent a coaching change at the start of the summer after the retirement of former head coach Bill Littleton and promotion of longtime defensive coordinator Moses Patterson.

During a June interview with The Monitor, Patterson anticipated much wouldn’t change.

“We’re going to continue our tradition and continue to run the ball. We’ll do a couple new concepts here and there, but the foundation has been laid,” Patterson said after his promotion to head coach. “It’s my job to go out there and continue to lay forth a new foundation for kids we have coming in and hold them accountable for previous generations that have come through Memorial.”

It’s safe to say Patterson has done precisely that during his first year.

The Mustangs (11-1, 9-0) captured the District 16-5A DI crown during the regular season and have an opportunity to break through to a regional final for the first time in program history. The only thing standing in their way is Corpus Christi Veterans (11-1, 9-0), which the Mustangs will face at 3 p.m. Friday at Corpus Christi’s Buccaneer Stadium in a Region IV-5A DI semifinal showdown.

The Raiders had their hearts broken at the end of the 2020 season after COVID-19 forced PSJA North to forfeit its second-round playoff game against San Antonio Taft.

This year’s group returned 17 starters who remembered the feeling. That’s why every practice, every game, every moment of the 2021 season has been special to the Raiders. From upperclassmen to underclassmen, they’ve all come together to create strong team chemistry, which has translated to success on the gridiron.

The team breaks out each huddle on “Familia.”

Another example of team unity can be found on the offensive line.

As PSJA North hits the field to stretch and warm up before each practice, each player can be individually identified by a large black decal number on the right side of their helmet, which matches the number on their jerseys on game day.

It’s to show love to senior offensive lineman and team captain A.J. Salinas, who suffered a season-ending injury during the summer.

“A teammate, a friend, a brother, he went down and tore his Achilles, so we decided to put his number on our helmet to pay respect to him, to play for him,” senior right guard Anthony Garcia said.

The Raiders will ride together into a tough challenge against Austin Westlake (12-0, 7-0) at 4 p.m. Friday at San Antonio’s Alamodome. It’s a chance for PSJA North to shock the high school football world as it takes on the No. 2 team in the nation in Westlake, according to MaxPreps.com.

The Edinburg Vela SaberCats have steadily been raising the bar for RGV football with five trips to the regional semifinals over the past seven years.

District titles and undefeated regular seasons have become the standard for the SaberCats, while the end goal remains a deep playoff run into the holiday season.

The SaberCats have dispatched each of their 12 opponents this year to earn their way to the Region IV-6A DII semifinals for a matchup against Austin Vandegrift at 4 p.m. Friday at Corpus Christi’s Cabaniss Athletic Complex.

It’s familiar territory for Campbell and the SaberCats. This year’s group has grinded its way back to Round 3 for a shot at making it further than any Vela team in program history — into a regional final.

“It’s extraordinary. Our team from the beginning has just worked out, been in the film room constantly, putting all hours in it,” senior safety Joshua Garcia said. “We’ve come from being not well known as sophomores to being well known as seniors, and this is another feeling. We’ve worked hard for this. We deserve this.”