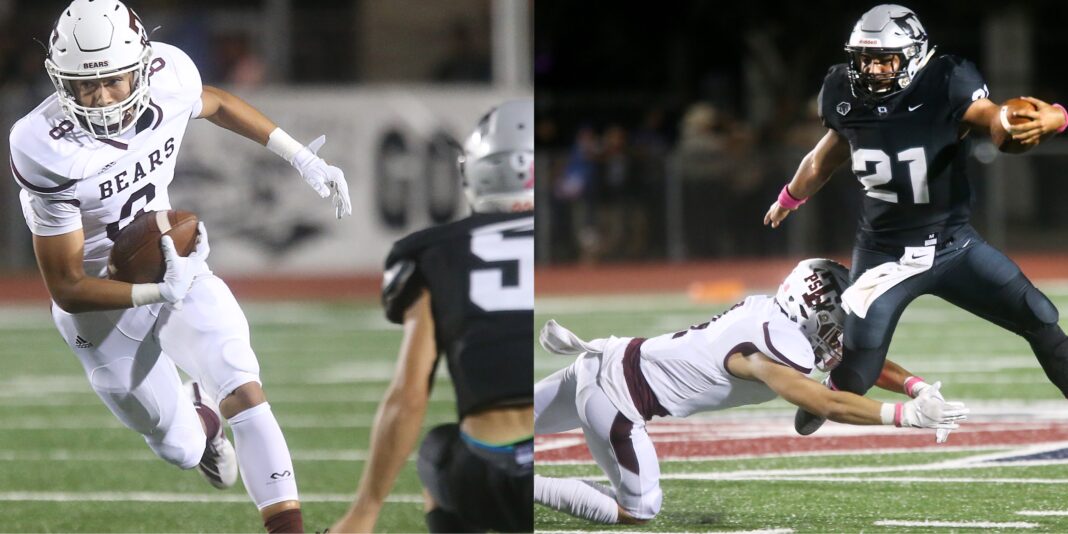 PHARR — Friday night’s collision between rivals PSJA High and PSJA North will be for more than just bragging rights in The Monitor’s Week 8 Game of the Week at 7:30 p.m. at PSJA Stadium.

For Raiders (5-1, 3-1), it’s a chance to extend their three-game win streak and cement itself as a playoff team in District 31-6A.

“Every year they kept talking about (the rivalry) and I was down playing it my first few years here, and then I figured I better hurry up and get on board with the intensity of it because we were getting out-intensified,” PSJA North head coach Marcus Kaufmann said. “… It’s just another ball game on the district schedule. We’re trying to win them all, but for the city and the bragging rights, there’s a lot of stuff going on.”

For the Bears (3-3, 2-2), it’s an opportunity to bounce back from two consecutive losses and to re-insert themselves into the playoff picture.

“It’s about understanding what’s at stake. Other than the rivalry and bragging rights, it’s a chance for us to get back on track,” PSJA High head coach Lupe Rodriguez said. “We’re looking for our team to get us out of this situation and put us back in the playoff hunt, and that’s been our message all week. Stay focused on the task at hand and take this as another game we need to win and get back on track.”

PSJA High enters the matchup having lost two straight, but its offense has taken tremendous strides since a 12-point outing in Week 1.

Sophomore quarterback Jaime Lopez had a breakout game against Mission High with 275 passing yards, 143 rushing yards and six total touchdowns. He currently ranks No. 3 in 31-6A with 1,154 passing yards and 13 touchdowns despite playing in two less games than No. 1 and 2.

Meanwhile, senior receiver Viggo Lopez, the district leader in receiving with 29 receptions, 598 yards and six touchdown grabs, has been a model of consistency out wide for the Bears. His one-handed, highlight-reel, 46-yard touchdown catch he secured by pinning to the back of his helmet during last week’s loss against Edinburg Vela encapsulated the big play threat and production Lopez has delivered throughout his career.

PSJA High head coach Lupe Rodriguez, who was a quarterback for Mission High in the late 1980s, said the play ranks among the top he’s ever seen.

“I’ve been coaching and playing for the past 24, 25 years, and I’ve never seen a catch like that. I’ve come across some great receivers, and Viggo is just a versatile athlete,” Rodriguez said. “He plays football, baseball and track and that was a remarkable catch by him to be running and having the focus and skillset to be able to hold on to that ball as he’s running on his helmet.”

Standing opposite of the Bears’ offense will be PSJA North’s “Blackshirt” defense, the No. 2-ranked unit in District 31-6A. The Raiders defense has shut out four of its past five opponents, while limiting the fifth, district leader Edinburg Vela, to a season-low 24 points during Week 3. PSJA North is giving up less than six points and allowing 160 total yards per game.

“They’re flying to the ball. It’s one of those 11 hats to the ball thing, but they’re having fun while doing it,” Kaufmann said. “Coach (Brett) Esparza is doing a great job of getting them to buy into what he’s trying to get done on the defensive side of the ball. Once they did, they’ve run with it.”

“We just have to play football. When we get in between the lines, every game is the same,” Kaufmann said. “It doesn’t matter what’s going on off the field, you have to take care of business on the field.”

Vaqueros fall to Islanders at home