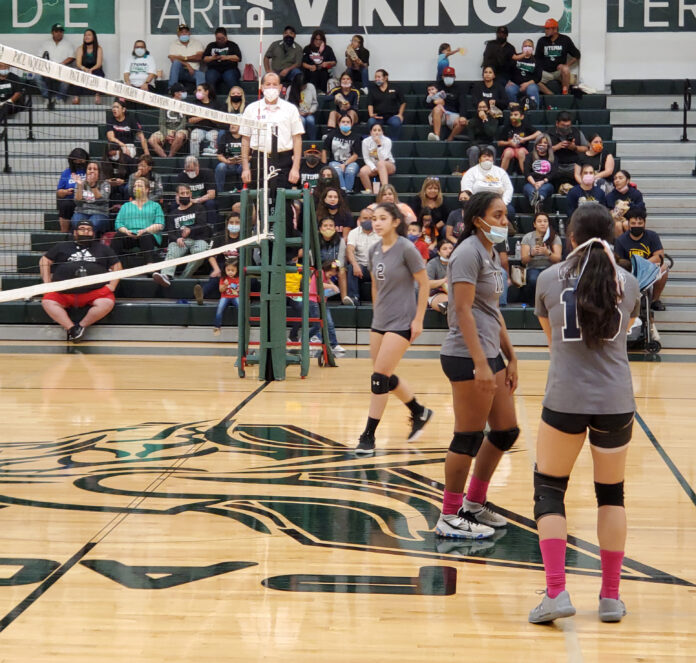 By EDWARD SEVERN, Special to RGVSports.com

Sophomore Andie Lozano-Lomeli got the game started for Pace early with some strong kills from the center, helping Pace to a 6-2 lead. The Lady Lobos are solid on defense, and with some hustle they stayed in the first set, cutting the Pace lead to 7-6.

But the sophomore heated up again for the Lady Vikings. Lozano-Lomeli began to get set up often by her sister, Dyllan Lozano-Lomeli, as well as her teammates, giving Pace a solid lead during the set, which they took 25-18.

“It definitely helps with the chemistry being sisters, but what helps even more is our amazing defense,” said Dyllan Lozano-Lomeli, a junior. “Their passes were on point tonight. I was able to give my sister a good set, and she was delivering every time.

“I am really proud of us. We came out and played with so much energy. It was a fun game.”

Lopez carried some of its fight from the first set into the second as both teams traded points. Cielo Chapa and D’arrah Howard had some nice kills and blocks. Noelia Ruiz, Sofia Castillo and Kenia Quinones chipped in with good defense as the Lady Lobos trailed by only two points early, 9-7.

Despite having a good attitude during the match, the Lady Lobos could not get anything going during the third set. Pace pounced, scoring 11 straight points to begin the set. Bryanna Narvaez, Natalisha Torres, Ava Davies, Ashley Gonzalez and Luz Martinez were great on the night. They all chipped in with points during the final set as they cruised to victory, winning the set 25-7.

‘We played good. We worked hard on our defense, covering the deep spots. We showed up tonight and played with a lot of energy,” Pace coach Daya Venegas said.

Pace vs Lopez Volleyball game
1 of 8

The Lady Vikings moved to 8-1 in district as they looked to keep pace with Brownsville Veterans Memorial, which is undefeated. The Lady Vikings will face third-place Edcouch-Elsa on Saturday.

“We have three days to get ready for Edcouch-Elsa,” Venegas said. “They have a great defense. In my opinion, they have the best defense in the district. We have to work hard for Saturday.”

The Lady Lobos, fifth in district, still have a shot of making the playoffs with four games remaining. They are chasing Donna High and will face Weslaco East on Saturday.