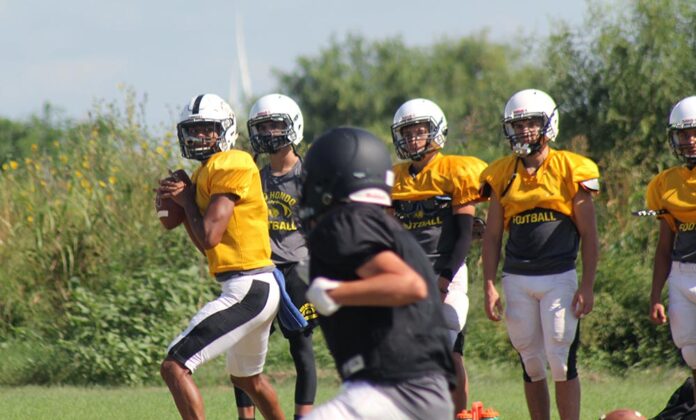 RIO HONDO — The Rio Hondo Bobcats made their long-awaited return to football when two-a-days commenced Aug. 2, hitting the practice field for the first time since 2019.

After one year without football due to the COVID-19 pandemic, being back in the swing of things has been special for coach Rocky James and his Bobcats, even if things still look a little different this season.

“It’s been great. The numbers are low, which I expect to get bigger numbers when school starts, but the kids that are here want to be here. It’s a really good group,” James said.

Rio Hondo technically doesn’t have “returning starters” since it had no season last year, but that doesn’t mean the Bobcats are lacking in experience. James has a strong senior class that features seven players who started as sophomores in 2019 at quarterback, receiver, running back, linebacker and on the offensive/defensive lines.

James said there are “around 35 varsity players” on the roster right now, so he expects to have several players lining up on offense and defense. Seniors Ethan Jeradiah, Tomas Arredondo, Ismael Rodriguez and Zechariah Rios are among the Bobcats being looked at as two-way players. Additionally, James will have some new faces playing both ways and his first freshman getting playing time as a newbie in several years in QB/DB prospect Ruben Atkinson.

The sport-specific time allowed during the offseason and a solid summer 7-on-7 season helped the Bobcats make up for lost time and has the offense, in particular, looking very close to game-ready. Tackling and reteaching defensive skills has been a key point of emphasis through the first two weeks of camp.

“We got lucky because in the summer we were able to work with the skills guys so we actually implemented a lot of the offense in the summertime. Our O-line was here all summer, so I think the offense was a little ahead of the defense when we first started and they’re still ahead,” James said. “The telling moment will be playing against somebody else. Our kids don’t usually hit each other as hard as you want to hit somebody else, so for us it’s really a moment to see what we’re going to bring to the table, so I’m pretty excited to see what we do.”

The Bobcats will return to the gridiron today in a scrimmage at La Villa. And though it won’t count toward the win-loss record, this outing will be a positive step for Rio Hondo and a good indicator for what to focus on. James put together a challenging non-district schedule with games against bigger schools to prepare for the tough District 16-4A Division II schedule.

“These kids are ready to go. It was a difficult time for everybody last year, and the boys are just excited to finally be able to play football again,” James said. “I think the atmosphere is going to be hype for them, so I just need them to breathe and settle down. … Being out in the Friday night lights, I think that will enhance this year’s team. We talked about, this can be taken away at any time like it was last year, so enjoy every single minute that you’re out there and I hope they do.”