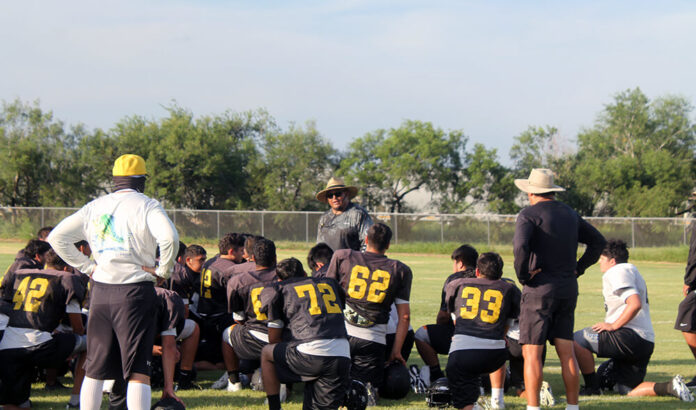 Santa Maria football coach Israel Gracia felt his team was “left hanging” when their 2020 season ended after just one game, so the Cougars aren’t taking this season for granted.

After a good summer of workouts and teaching, the Cougars hit the ground running when the 2021 football season started Monday.

“We’ve got a lot done this week. The kids have shown that they’re committed, and we’ve had a really good number every day,” Gracia said. “We’re just working. The focus right now is about attitude. Trying to get the right frame of mind, the right attitude. A lot of these kids weren’t used to coming to school, and over the summer we kind of developed them coming every day. So that’s No. 1, developing the attitude.”

Gracia has been pleased with the energy and effort shown by the Cougars. He has a mixture of veterans and newcomers that are ready to step up and take advantage of every chance they get to hit the gridiron. Santa Maria won’t be playing many true home games with its field under construction, but Gracia is hopeful to have a late-season game or two played in the home stadium.

One of the biggest strengths for the Cougars is their veteran offensive line, led by Pablo Ibarra and Nate De La Rosa. Gracia credited those two lineman with “taking charge of the team.”

“We’re really excited about the guys coming back. We have about five coming back on offense and five on defense, but the core is starting to develop. We also have a bunch of young guys that show promise,” Gracia said.

Santa Maria, Santa Rosa enjoying return to the gridiron
1 of 8

For newly appointed Santa Rosa coach Joe Marichalar, the priority for Week 1 is getting to know his Warriors and letting them adjust to his way of doing things. It’s a bit of a disadvantage that he didn’t get to work with his team over the summer because of the late hire, but Marichalar is nothing but grateful for the chance to lead this team.

“It’s an awesome feeling, first of all, to be back in a head coach position,” Marichalar said. “I’m truly honored, and I’m truly blessed that the community of Santa Rosa, board members, administration gave me the opportunity to lead this group of young men and young ladies.

“But I am playing catchup. The race started, and I just took off when the gun went off,” he continued. “I’m a little bit behind, but that’s OK. I tell the kids, ‘Just one day at a time.’”

Marichalar said it’s too early to know who his leaders will be or who will be starting in which positions. He’s hopeful that after one or two scrimmages, the Warriors will have a better sense of what their identity will be and “who those dogs are” that will be key playmakers.

For now, Marichalar is keeping things simple and enjoying being back in a tight-knit community, coaching student-athletes who work hard and have a lot of potential.

“We don’t want the kids to be learning too much or thinking too much, just simple concepts and simple schemes, and just get really, really good at it. Through time and through reps, game reps, they’ll get better,” Marichalar said. “I love them. It’s a great bunch of kids, it’s a great place. I’m eager and excited to work with these guys. There’s good commitment. They’re coming out and being consistent, and they just want to work.”

Vaqueros fall to Islanders at home